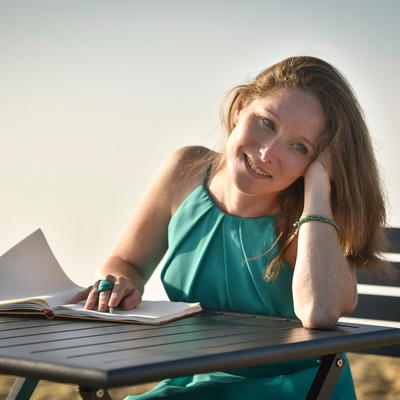 Pop, Zürich – Very early on Estelle started her musical life when she enrolled in piano lessons. Only later as a late teen did she really realize what her true... Read Biography

Very early on Estelle started her musical life when she enrolled in piano lessons. Only later as a late teen did she really realize what her true passion was and jumped head first into singing, focusing first on classical singing at the Dance Centre of the Marais in Paris. There, she met her teacher Selima Al Khalaf, who taught her how to steady her voice.
Estelle continued her training in Hamburg at the Powervoice academy and later under the guidance of Irene Wiese, with whom she perfected the basics in classical singing. She completed courses at the Manufacture Chanson academy in Paris, attended song-writing workshops, including Chantal Grimm’s workshops, and discovered the inside of a recording studio.
In 2004, she settled in Zurich and continued working on her voice with the help of Daniela Sarda, Joana Aderi and Brigitte Wulliman. Her participation in singing contests in Switzerland and France took her musical education even further. In 2008, she organized concerts and also took part in the masterclass “Chante ou bien”, the Swiss version of “Rencontres d’Astaffort”, sponsored and organized in the Valais by the famous French songwriter Francis Cabrel’s team. There, Estelle met the well-known lyricist Frédéric Kocourek (known in the French music industry for his work with Natasha Saint-Pier, Isabelle Boulay, Rock Voisine, Michael Jones, Sarah Brightman, etc.), who gave her some valuable lessons. Such thought-provoking experiences led her to write and produce her first original song, and to continue performing in concerts and other events for well-known personalities.
After taking a family break, Estelle returned full-force to song-writing under the guidance of Michel Arbatz and his Paris-based workshops. She recovered her vocal discipline under the kind supervision of Sarah Abrigada and surrounded herself with professionals to guide her “Droit devant” (Straight Ahead). In 2018, Estelle released her self-produced debut album. As the writer of her own lyrics, a lover of words of any language, a custodian of culture, a talented singer, a caring woman, Estelle gives her all every day. Professional and passionate, and doubtlessly predestined by her first name (‘Estelle’ means star), she will follow her star and keep looking “Droit devant”.