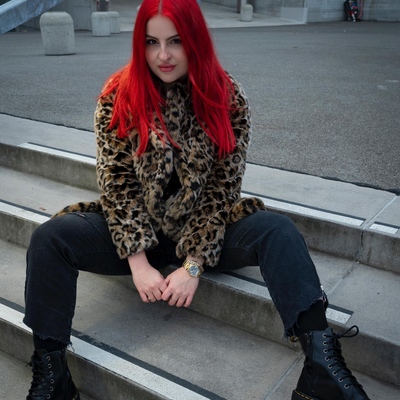 Pop, Zürich – Skyler Wind has been writing and composing music since she was eight years old. Though she speaks four languages, the 24-year-old Swiss-Canadian... Read Biography

Skyler Wind has been writing and composing music since she was eight years old. Though she speaks four languages, the 24-year-old Swiss-Canadian born in Singapore succeeds in communicating universally through her music. It is abundantly clear that Skyler aspires to inspire in everything she does, especially when it comes to chasing her dreams. A dream that seems closer than ever, these days.
​
Combining her talent for writing catchy melodies and her captivating, soulful voice; it is no surprise that her musical career has grown steady and fast from the beginning. As soon as Skyler Wind released her first singles “Unleashed”, “Evil” and “Don’t Need Your Love”, produced by Lukas Zimmermann (formerly “Lunik”), her meteoric rise to grabbing the nation’s attention began through thousands of airplay and charts placements on an (inter-)national scale. The Zurich-based singer-songwriter, who studies at the University of Zurich full time while working on her music simultaneously has fought hard for her voice to be heard with the intentions to become an inspiring role model and storyteller. She wishes her music to be a safe place to escape to, yet also, a portion of hope to hold on to. Essentially, a home for thoughts to wander; souls to ponder. By means of her breakthrough song “Don’t Need Your Love” in 2018, she gained the attention of the nation through pivotal rotations on major Swiss radio stations such as SRF3 and Radio Swiss Pop and similar. Echoing this, international radios followed suit. Instead of resting on her first success, however, Skyler Wind went ahead and performed for increasingly large audiences; for instance, in the finals of the prestigious “Kleiner Prix Walo” contest.
​
At the end of 2018, Skyler released “Crazy About You”, a catchy pop-anthem which she co-wrote with the US-songwriter Scott Krippayne. The tune was produced by the internationally known producer Pele Loriano. This single made first waves right away, especially in regard to streams on Spotify and similar, yet, its astonishing growth is only in full process right now with the belated release of an official music video. Through 1.4 million impressions, 155'000 views and counting, Skyler Wind has accomplished what many artists dream of: a viral hit on the internet.
​
In April 2020, Skyler Wind released her single "Digital Pressure", which entered the iTunes Charts at #3 straightaway. Digital Pressure generated an impressive amount of (inter-)national airplay from the most pivotal radio stations in Switzerland such as SRF1, SRF3, Rete Tre, Radio Swiss Pop, Energy (Discover), Radio 1 and many more. Having found the right production team to work with that fully allows her vision to unfold, this song feels entirely new: entirely hers.

One year later, Skyler Wind participated in Swisscom Blue's "Open Stage" contest with her newest song "worst thing" and took home the second place in the public voting. This huge step and her development as an artist is undoubtedly reflected by her rising social media statistics and community (10k+ on Instagram). In the meantime, her songs have been streamed roughly 200'000 times on Spotify.
​
Currently, Skyler Wind is working on her next big project: the release of her first EP to be released in the fall.

A prior release, the single "Happy Now?" (+ lyric video) has been released on June 18th, 2021 on all platforms. Moreover, the multitalented artist is working behind the scenes of the Swiss music industry as a songwriter.

Registered since about 4 years
Last login on 18 June 2021