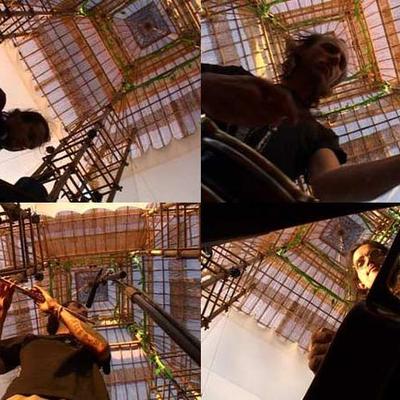 www.peakrec.com
The Peaking Goddess Collective, a four-piece live digital & organic band known for its outstanding and longstanding performances, was born in Switzerland in 2003. Originally founded by guitarist Ajja S.F. Leu, bass-player Master Margherita and percussionist Dymons , it reached its current formation a year later when flutist Flooting Grooves joined in. The PGC is often linked with Peak Records, because two of its members are Peak founders Ajja and Master Margherita.

Masterfully fusing acoustic instruments & electronic devices to form a unique style – the Collective is known for its unmistakable approach to trance, be it chilled ethnic beats, expansive morning trance or foot-stomping psytrance.

Each musician in the PGC actively participates in the live and studio sound designing and tweaking. During their much appreciated live performances, several laptops are synchronised and most of the tracks are spread out over more then one computer. Bass-lines, hi-hats, samples and synth-lines are dropped in live and the instruments are run through loopers and master fx boards, giving their shows a very spontaneous and organic feel, while ensuring that the sonic quality is top-notch. You could safely say that until they are playing live at a party or recording in the studio, their tracks only exist in potential…

Since its formation The Peaking Goddess Collective has performed extensively in parties, festivals and happenings around the world, including the Boom Festival, Soulclipse, Zoom, Doof, Life Festival, Alex Grey’s MicroCOSM gallery and the Berlin Tattoo Convention. The Collective’s live feasts have pleased crowds in Switzerland, Portugal, Germany, Holland, England, Ireland, Scotland, Turkey, Israel and the USA. In the second half of 2007, the PGC will perform in festivals around Europe, including the Wickerman Festival and the Psychedelic Ceilidh.

The PGC has contributed with several chill intro and outros on Peak night-time compilations, as well as full-fledged compositions on each of Peak Records’ chill compilations. Many of its live performances have been recorded and self-released. “Organika ”, the Collective's debut studio album was released on Peak Records on August 17, 2007.

Although its members have all established themselves successfully as separate musical entities, they continue to perform together in trance parties and music festivals worldwide – because they enjoy the organised chaos of playing together, and all are in agreement that their Collective works are often richer and more diverse then their solo projects. The sum is greater than its parts…

Registered since over 14 years
Last login on 2 September 2009