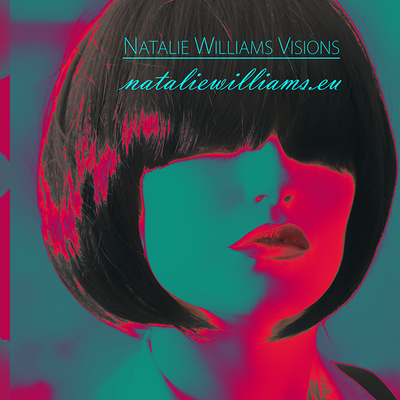 Born in England, Natalie Williams was soon to move to Switzerland where she grew up. From her earliest years her home was filled with a wide range of music. She began her career accompanying the playback of female singers with the help of a colourful Fisher- Price microphone, little knowing that she would someday take on the lead role and with a rather less colourful Neumann. At the tender age of eight she received classical woodwind tuition on the common Recorder and progressed to the baroque Recorder. This training developed her excellent ear for music and laid the foundations of pitch, timbre, timing and harmony. Disciplines that she would need later on.

She made her debut as a singer at the age of twelve with a local band. A few years later she featured in a Gospel choir which strengthened her resolve to become a vocalist. During her early teens she experimented with just about every kind of music and together with some friends she spent countless hours in practise rooms, on assorted equipment, Rapping, Scratching and Hip-hopping her way forward. A brief but nonetheless important part in her musical development was the excursion into the world of Punk and Rock music where, together with a number of likeminded mid-teens enthusiasts, she would spend some time structurally testing an air raid shelter. It was at around that time that she recognised the need to take professional voice tuition and underwent extensive training in how to breathe and widen her vocal capabilities.

After a short break from the world of music and now a young adult, she was encouraged by a DJ and friend of hers to step up to the microphone once again and record some Jingles for him. This led to her recording a series of songs for the club scene and immersing herself in the world of House and RnB. Although now firmly on the back burner while she concentrated on her professional career, her passion for music stayed with her and after three years she went to live and complete her studies in Ireland. It was around that time that she was engaged as lead singer for a 70’s style Funk band.

Having established her own particular work life balance, she started to experiment with computer based music and developed her first compositions in 2007.

Meanwhile, Natalie Williams Visions is not only a producer with several years of experience in producing, mixing, mastering of electronic music but also in the mix and rocking the house as a DJane.

2020 / Natalie’s EP Trilogy by Natalie Williams Visions was released in May 2020. The 3 tracks are dedicated to deephouse. Available in over 150 download stores worldwide.

2019 / Regular commissions in Cologne and first performances in Portugal Lisboa and Mallorca.

2018 / After regular Engagements in Switzerland, Natalie now also plays and expands as House DJane in Germany.

2016 / Natalie released her new Single “IYOU” with 2 versions to delight the listeners. It’s getting deep and clubby now!

2015 / Natalie's new single "Restart" was released in March 2015. Restart is more colorful and is going more towards club sound in comparison to the past. Globally available in more than 150 download stores.

2013 / Natalie's third album VISIONS Volume 3, which was mixed and mastered by herself, was released in June 2013. Her vocals were recorded at Shelter Studios.

2011 / Natalie released her second album, VISIONS Volume 2, in April 2011, which was arranged and mastered at Shelter Studios in Switzerland.

2007 / She approached the publishers with them and was put under contract by WAM Productions for her very first Album, VISIONS Vol.1., which as been released 2007. special blend of House and Chill out rhythms to delight the listener.

FOR THE LOVE OF MUSIC
Copyright © 2015 Natalie Williams. All rights reserved.