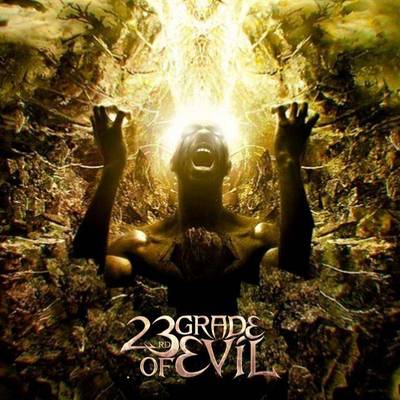 EVIL (noun) /ˈiːv(ə)l / :  A power that makes people do very bad and very cruel things… Does everyone have the potential for evil? Obviously some have more of it than others… and thus the 23rd GRADE OF EVIL has been reached.  The band explores the reality and anatomy of EVIL and the ancient struggle  between GOOD and EVIL in its powerful METAL.

23rd Grade of Evil started their career as Morbus Wilson in the nineties. Their debut album “Corematic” was critically acclaimed in Switzerland and abroad. After a break and after having designed a new concept the band reformed in 2004 as 23rd Grade of Evil. They recorded their debut album "What Will Remain When We Are Gone" in 2009 at the Little Creek Studio under guidance of V.O. Pulver (Pro-Pain, Destruction, Gurd, Headhunter, Fear My Thoughts). Pro-Pain's Gary Meskil contributed backing vocals. The album was released and distributed in collaboration with Non Stop Music Records and Quam Libet Records. The album sold well and got positive reviews in metal magazines throughout Europe. After many successful shows, some of which with Pro-Pain and Sepultura, the band started writing songs and lyrics for the second album.

The band's second full lenght album "Bad Men Do What Good Men Dream" was again recorded at V.O. Pulver's Little Creek Studio. The twelve new songs turned out to be more melodic and multifaceted, but still remain aggressive and catchy. The new album delivers a varied mix of different moods and grooves. The lyrics reveal very personal and incisive stories of the real world of evil.

"Bad Men Do What Good Men Dream" is released through Artist Station Records and distributed by Soulfood and Finetunes in Europe and worldwide.

23rd Grade of Evil are currently promoting the new album and spreading the EVIL...

Welcome to the 23rd Grade of Evil!

Registered since about 13 years
Last login on 5 July 2012