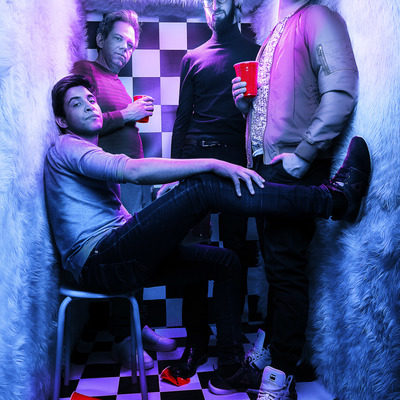 Pop, Valais – "While producing the second album, we hang pictures of operas and churches in the studio next to pictures of kids smoking weeds in dodgy streets,... Read Biography

"While producing the second album, we hang pictures of operas and churches in the studio next to pictures of kids smoking weeds in dodgy streets, we wanted to sound like the contrast on those images“ says Melchior (bass, synths). Kyasma means crossover. This precisely defines Kyasma's musical style, which combines electronica, grandiloquence aesthetic and arabic influences in an alternative pop format. Initially, Kyasma's influences range from Queen to Aphex Twin. “Our artistic goal is to mix the exuberance of Queen with weird electronic and arabic sounds and still sound pop“ says Djamel (lead vocal, piano, guitar). “This was ridiculously ambitious, but we always wanted to make music that glues aesthetics that seems irreconcilable“. Kyasma is composed of 4 members based in the UK (London) and Switzerland. Djamel and Melchior started playing together at the age of 12. Jonathan (drums) and Raf (synths) joined the project later. In 2012, the band released its debut album recorded by legendary producer John Cornfield (Stone Roses, Razorlight, Muse). “The recognition in Switzerland was unexpected“ says Raf (synth). “We reached top 30 in the hitparade and got nominated at the Swiss Music Award, that was great for an indie band“. Kyasma is now bringing out its second album, "Party is Over“. “After the first album, we were stuck“ assumes Jonathan (drums). “We went to Marrakesh and bought some very cheap arabic strings instruments for fun, but we quickly realised they sounded amazing on our songs“. Kyasma's new album was recorded in New York, London and Switzerland and was produced by Kyasma and Joe Cross (Hurts, Courteeners, Lana del Rey), Toby Scott (Kaiser Chiefs, Gossip) and Charles Newman (Magnetic Field). Regarding the group's news, Kyasma's first single “Like A Lion“ will be released in September 2019, followed by the song “Party is Over“ in
November. Kyasma will bring out “Give me a Call“ in February 2020 and finally its second album in March 2020. What the medias say about Kyasma SRF : “Rarely does a new comer appear so mature and refined“.SRF: “Kyasma are a hell of a live band“Didier Dana, “Le Matin“: « This group is megalomaniac! “.Fabien Eckert, “20 Minutes“: · “Superlatives don't lack to describe Kyasma“. Olivier Hugon, “Le Nouvelliste" : “Kyasma does not imitate or copy. It creates“. Anectode There have been various rumours reported by the medias that Justin Timberlake was inspired by the visual of Kyasma's first album for the cover of his album “The 20/20 Experience“. “This is proof that we are on the right track“, comments Djamel ironically.

Registered since over 15 years
Last login on 23 September 2019