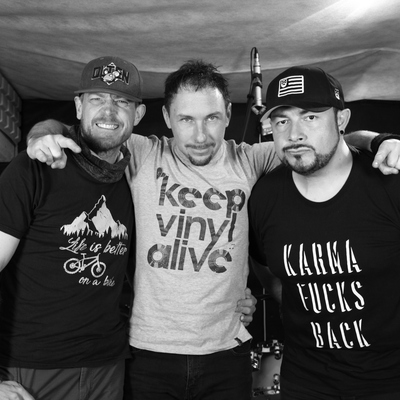 Rock, Aargau – It doesn't always take a lot of effort, lots of gear or recording concepts to create music with expressiveness and strength. Music with a lot of... Read Biography

It doesn't always take a lot of effort, lots of gear or recording concepts to create music with expressiveness and strength.
Music with a lot of BALLS, without frills and compromises.
This is UBERBALLS. Three guys, three instruments, minimal material and therefore music with power, expression and catchiness.
Lou Stick, (Drums), iivel (Guitar and BG Vocals), and Austin (Guitar and Leadvocal). Yes that's right, we don't have a bass player - but nevertheless, or just because of that, we make a rich sound with lots of balls!
The band was formed in 2012. After the first release, the double album "Warning contains Nuts" in 2014, the then bassist decided to leave the band. From the beginning it was clear to go on without a bass player. Why? It's easier and UBERBALLS have enough ….!
In 2017, mr. longstick (a fast drummer with distinctive sound and playing technique) joined the band as the new drummer.
What does UBERBALLS sound like? That is in the ear of the authority:) Metal, punk, rock - or comedy? It is definitely fun. At our live performances it becomes clear that what is on the record is only the beginning. On stage we play with our looks and earn the occasional laugh from the audience. UBERBALLS are unexpected, entertaining and fun.