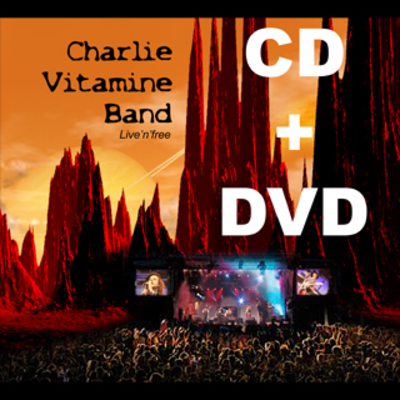 Rock, Vaud – The Charlie Vitamine Band entrenches itself in the depth of the blues, via a mixture of its own rock'n'blues compositions as well as the great... Read Biography

The Charlie Vitamine Band entrenches itself in the depth of the blues, via a mixture of its own rock'n'blues compositions as well as the great standards of Jimi Hendrix and others. The CVB has and continues to perform both electrically on the concert stage and festival arena as well as acoustically in intimate club settings all over the world.
From 1974 to 2006: Charlie Vitamine played in about 20 groups, in 720 (counted) concerts in Switzerland, France, Italy, England, Canada and USA, on 11 CDs and a DVD,as well as various appearances on some other k7, CD, DVD or group
compilations. Thanks to its original and extensive international musical journey, Charlie Vitamine has appeared in dozens of newspaper articles, and on many radio and TV programs. As well as reinterpreting blues and rock songs from the masters, in particular Jimi Hendrix, Charlie Vitamine has been responsible for adding some 150 songs to the repertoire, maintained by Suisa in Switzerland. November 2004 saw the release of the 11th CD/DVD with a bonus for the first time of a DVD, on the Label Zedprod. Official distribution is taken care of by www.lugeon.ch

Registered since over 15 years
Last login on 4 February 2009