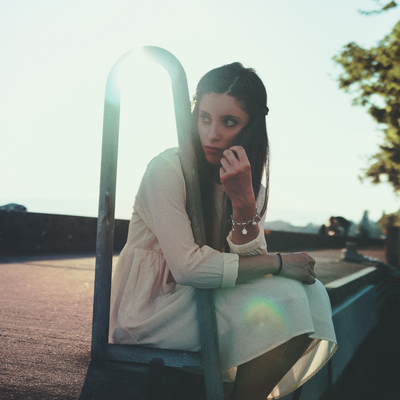 Pop, Zürich – Coming from Switzerland, Nadine Carina is an electronic pop songstress writing her own material and experimenting in various genres, while always... Read Biography

Coming from Switzerland, Nadine Carina is an electronic pop songstress writing her own
material and experimenting in various genres, while always keeping strong melodies and a
dream-like quality at the centre of her art.

In 2010, after moving to England to study at the renowned Liverpool Institute of Performing
Arts (LIPA), Nadine releases a string of self-released music ventures, albums and EPs via
American label (Furious Hooves), and Swiss labels (Oh Sister Records, On The Camper Records
and Stattmusik Records). Nadine’s first album, "Magic Box", is released by Stattmusik Records
at the end of 2011. The album is a collection of songs including traditional folk songs alongside
an array of experimental tracks.

Her second release, "Little Bits", a self-released EP, instantly capture the attention of
Liverpool’s music scene in which she starts playing more frequently in clubs and venues. Bido-
Lito, the famous free Music magazine from the city, even offers her a front cover and a two
pages interview while she is still a student at LIPA.

In 2012 Nadine travels between her home country of Switzerland and the UK to play many
concerts. After a long stint of going back and forth, Nadine reside back to Liverpool and starts
experimenting with a 4-tracks cassette recorder bought of eBay. These experiments lead to an
acoustic self-titled EP, which grace American label Furious Hooves and is released in April 2013
on a limited run of physical cassettes. The cassette is an immediate success and is sold out
after only a few days.

In 2013 Nadine also releases the EP "Where I Love", her first time playing with a full band both
live and on a record, creating a dimension her other EPs never explored; the 50s-60s era. The
EP is greeted with a warm reception as Nadine is selected for the Orange New Talent Contest
in Switzerland, and is invited to play at the Caprices Festival on the same stage as Mika and
Nelly Furtado. That same year, she is invited to play a showcase concert for Bido Lito and is
nominated for the Liverpool GIT Award.

Her last full album "Never Been To Heaven" is released on the 18th September 2015 through
Oh Sister Records. Following the release, Nadine plays a string of headline shows in the UK
and as support act for the Lapsley UK tour. The album is well received both in Switzerland and
in the UK, its first single "By The Lake" is featured for the online H&M Studio Spring Collection
advertisement, and the second single "Crystal Eyes" is included on official Spotify and Apple
Music playlists, played consistently on Swiss radios, as well as selected for a US short movie
scene.

Nadine has collaborated with some interesting electronic producers over the years, including
Sun Glitters for the collaborative split EP ''SGXNC'' (released on Abandon Building Records in
2016), and Swiss artist Sensu (Quartz Records). She has also played many concert, few
noticeable examples are the support for CoCo Rosie in Zürich, the dates at Daytrotter and
Birthdays in London, Sofar in Manchester, Electrosanne Festival in Lausanne and the Liquid
Room in Tokyo for the Red Bull Music Academy event EMAF.

Nadine is currently working on her new solo full-length album, expected for November 2019.

Registered since over 13 years
Last login on 8 February 2021