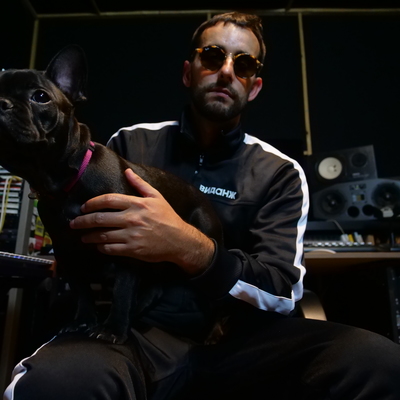 Dancehall, Afrobeat, ..., Geneva – 808 Delavega of his real name Etienne Maitre is a Swiss Dj producer of Spanish origin. Born on August 30, 1984, he grew up in Geneva in the popular... Read Biography

808 Delavega of his real name Etienne Maitre is a Swiss Dj producer of Spanish origin. Born on August 30, 1984, he grew up in Geneva in the popular and multicultural district of the Jonction where the alternative music scene of Artamis was located in the early 2000s.
Passionate about hip-hop, reggae and especially dancehall, he founded Derrick Sound with his brother Nicolas Maître. During the 2000s, as Derrick Sound, he travelled in Europe and around the world, notably in Jamaica, England and the USA. At the same time he discovered production, starting with the recording of dubplates (exclusive songs). He later experimented a great succes with the band LIPKA in collboration with Felix Landis.
In 2013, with Nicolas Maître and Nicolas Meury of Little Lion Souund, he created the Evidence Music label in order to market the music produced by the different entities (Derrick Sound, LIPKA, Little lion etc.). With Evidence Music he is involved in a multitude of projects at the production, arrangement or mix stage. He produces artists such as Sizzla, Capleton, Morgan Heritage or Danitsa (whose first album Ego was produced by Evidence Music and who received the Swiss Music Awards in 2018) while remaining active with LIPKA.
After all these experiences, he is focusing on a more personal project named : "808 Delavega". The idea is to compose, arrange and mix exclusive tracks with different artists mainly from the Dancehall scene.

Registered since over 1 year
Last login on 7 December 2020