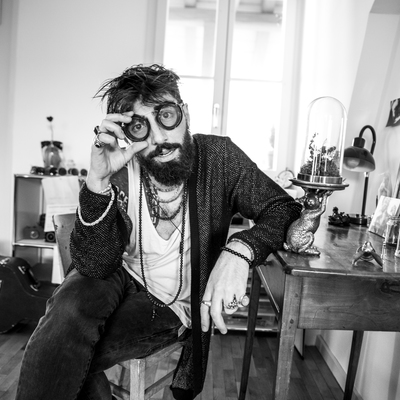 2020
ABU -Ordinary
Light as a feather, without any frills and as honest as joyfully sparkling children's eyes, ABU's new single «Ordinary» slowly dances closer. A guitar and his voice are all ABU needs to take us outthedoor to the streetwhere he depositshis past issues. Free to take away, so to speak. Could be that someone couldstilluse them.Selfless, unexcited, but different from what the song title would suggest, because there is nothing ordinary here. “Ordinary” is a tête-à-tête in the banquet room of your own mind: naked and unadulterated, flawed and imperfect. Once again, ABU flips off the zeitgeist, because he has no desire for softened synchronization and high gloss polished emotions. He prefers to write songs with an urgency that doesn't stop at broken microphones or any conventions, but rather tells stories that get under your skin. Finally, on a typical autumn day, ABU managed to write a song in which he chases the sun at night and steals someone's nights as a lovable thief. Anything but ordinary, right?

--------------------------------------------------------------------
2019 - Madonnas alongside quirky doodles on the walls. Polaroid photographs on a Biedermeier table, a skull of a baby alligator slumbering peacefully. Entering ABU’s home is like entering a different world. Crayons, notebooks, an old typewriter, pictures and sketches are scattered among this tiny realm. This is where art is made, this is where ABU takes place. He, who is a spirited artist, scribe and maverick, but mainly a kind-hearted human being. Knowing his history, and how this diminutive, bearded man from the boondocks rubbed society the wrong way in his early years, up to the point of being deemed incurable, helps understanding the human ABU. This lively, libertarian spirit, who questions boundaries, shelving and rules, follows his passions with total commitment and creates his own small world over and over again. And this small world has grown to a veritable diminutive universe over the years.

When the bubbly man quiets down, one can almost hear his heart breathing. It beats as if there were no tomorrow. ABU in a frenzy pursues the moments, in which he can lose and reflect himself. As his home, so is he: diverse, excessive, odd and truly fascinating. ABU is an equilibrist, who continually performs his tightrope act in order to further advance towards the sun and grasp the world from a bird’s eye perspective. And this perspective is celebrated on «R E S E T». Alternative pop and electronically dyed indie embrace – genre boundaries blur and become obsolete. ABU, this diminutive bearded man from the boondocks, invites us into his impulsive and uncompromising world. «R E S E T» - start over. ABU recreates his world anew and offers unforeseen insights into his here and now. The record seduces, seizes and inspires. And who has had the pleasure of meeting ABU knows that something big is approaching us.