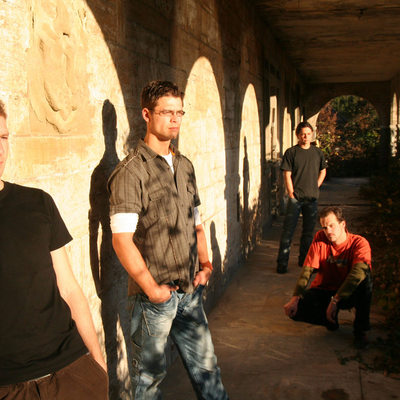 Inspired by the lake and nature the four artists of ad lacum compose their songs, working up personal experiences. The result can be describes as a homogenous mixture of rock, metal and emo-metal. This remarkable symbiosis is associated with their musical influences as the well known ‘Black Sabbath’ or ‘Iron Maiden’ and younger bands like ‘Three Doors Down’ or ‘Hoobastank’.
As they grew up together or know eachother since years, the four fellows convince as a compact united team. On the one hand this is reflected in their music and on the other hand in their performance.
Their absolute highlight was to take part in final round of the ‘Battle of the Band’ contest, that took place at the ‘Volkshaus’ in Zurich. Only eight bands of the 200 competitors attained the final round! Ad lacum played on several occasions in the nearer and further vicinity.
In spring 2004 the fellows recorded the EP ‘Through the open door’. The great experience of producer Matthias Hillebrand helped to recognize the vigorousnesses of each musician and to enhance each abilities. Grown was a respectable product. It convince by its compact, fat and dirty sound, whereas the core element is the voice charged with emotions. At least likewise they impress at concerts and excite the audience with their performance.