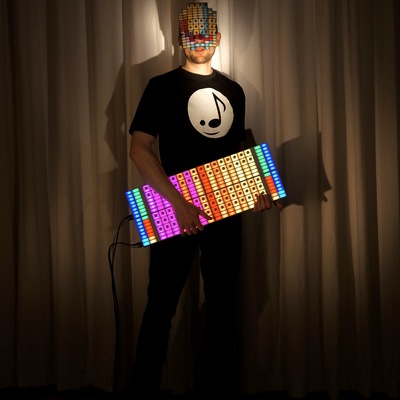 Techno, Zürich – Ander: born in Hamburg, Germany, living in Zurich, Switzerland. Live act, Producer and Tinkerer at its finest. A performance made for the club,... Read Biography

Ander: born in Hamburg, Germany, living in Zurich, Switzerland. Live act, Producer and Tinkerer at its finest. A performance made for the club, beyond your usual DJing performances or static laptop acts. Preaching from a pulpit which he designed and built himself, commanding over the most complex controller of the known club universe. So many knobs and buttons, dynamic, colorful, seductive - how the hell does he know how to handle this beast? Convincing at first sight, it must be tremendous fun to be in control here. Maybe it even makes sense. Or it makes you mad.

With his unparalleled gear, Ander plays a absolutely water-tight live act. Not having to rely on pre-produced tracks, all his performances are direct, live and born out of the instant of their creation. Unique. Always focused on the groove of this moment, still riding you to the next bassline. Musically Ander's jazz influences may be heard in the background, but before all it is solid, thudding minimal techno taking you from silky hihats to the next playful tete-a-tete. It pushes and pumps and pulls you around until you blissfully agree. What more could you want? Ander's audio-delicatessen have been appreciated by audiences in Zurich, Basel, Bern, Davos, Hamburg and New York. In his monthly show on the Zurich-based internet radio audioasyl.net Ander collaborates regularly with like-minded live act from the bustling Swiss electronic music scene.

As a producer, Ander develops his tracks out of his live performances. This way he stays true to the groove that is audible when he is performing on stage. Ander has been releasing music on the Hamburg-based label Eminor as well as on Zurich's Nice Try Records.

Registered since about 14 years
Last login on 21 January 2015