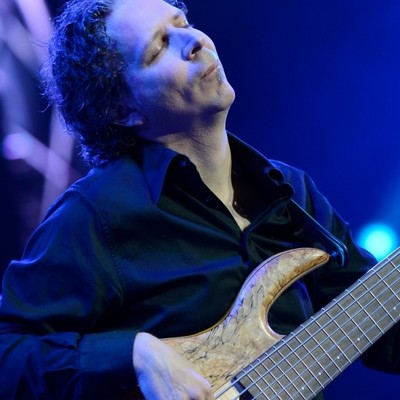 Jazz, Basel-Landschaft – After finishing his studies at the Jazz&Rock Schule Freiburg (D) in 1994 he made his mark mostly in Afro-Cuban latin bands. He ist he director oft... Read Biography

After finishing his studies at the Jazz&Rock Schule Freiburg (D) in 1994 he made his mark mostly in Afro-Cuban latin bands. He ist he director oft he 14-piece salsa-orchestra PICASON and has released 3 albums with them. He has worked with internationally known artists such as Juan Munguia, César Correa or Ernesto Manuitt.

He has contributed his “groove” to Andy Brugger’s DIET BANG or Kaspar Ewalds „Exorbitantes Kabinett“ KEEK (a.m.o.) and is currently touring with Jochen Baldes‘ und Johanna Jellici’s Soundfields (CD: „invisible door“). He played with jazz-players like Bob Degen, Christy Doran, Peter Perfido a.m.o.
A more sensitive side of his playing can be heard in the flute player Günter Wehinger’s Quartet with the vibraphonist Urs Wiesner and japanese koto-player and ECM-artist Karin Nakagawa. (CD “Debussy...”)

In pop music as well as in non-cuban world music he is a bassplayer in demand and played with
Eric Wainaina, Nubya, Nilsa, Levin Deger, Neighborship, Vic Vergeat (a.m.o.)
and he is involved in crossover project to the contemporary “classic” scene, such as Etienne Abelin’s Matteis Project or Conrad Steinmanns Ensemble „Diferencias“.

His debut CD „AVALANCHES“ is a pure bass solo album and is considered to be a peculiarity in the Swiss jazz-discography.

André Buser is teaching electric bass, ensemble and harmony at the Jazzcampus Basel (CH) and works as an arranger and producer.