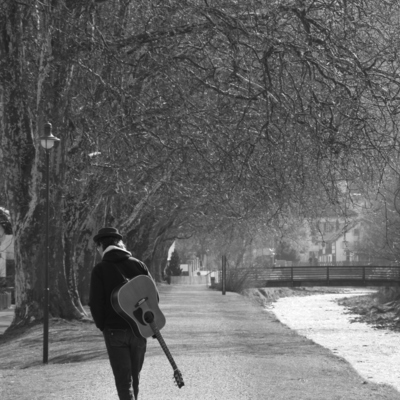 Folk/Country, Folk, St. Gallen – Story Andy Flinn was born in Camrose, Alberta, Canada. Before his first birthday, he decided to move his family, including parents and his two... Read Biography

Andy Flinn was born in Camrose, Alberta, Canada. Before his first birthday, he decided to move his family, including parents and his two older siblings to Switzerland. During his childhood there, he first experienced to joys of the recorder, bees and piano playing. As preschooler he learned to read from Swiss TV-text and as a consequence, was a thoroughly bored and rebellious student in grade school.

In the 70’s, because of his oldest brothers obsession with rock music, both Andy and Walter scored a nylon string guitar from their aunt Elsie, the rudiments of which Andy learned for a high school production of Shakespeare’s Winters Tale. Andy subsequently was drafted into the Swiss military (mountain pioneer), and as singer and rhythm guitar player into Walter’s rock band “Chinook”. That band recorded a vinyl 45, “Gruusig, Schliimig”, and a 33, “Storming” in the mid 80’s. They played various Festivals in Europe and then left for Toronto, Canada “to become famous” :), but dissolved and became spare parts and founding members of the Toronto cult band “Look People“. Andy kind of got stuck in Canada, expanded his gene pool, left the band and became a noted “hackist” for a while, working for ATI, Commodore (Amiga), IBM and several others as graphics and OS specialist.