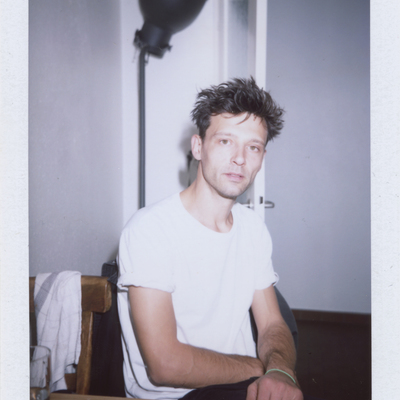 Angelo Repetto's debut album Roboto is a musical melting pot of ambient, synth-pop, wave, kraut-like IDM and acid. Known for being part of the musical duo Wolfman, which Repetto formed together with Katerina Stoykova in 2013, Roboto is the musician's first album to capture the ambivalence of his musical relationship with techno.

​Angelo's father, Marco Repetto, was co-founder and drummer of the dark wave pioneers Grauzone who joined the Neue Deutsche Welle in 1980. Angelo Repetto was surrounded by his father's synthesizers since early childhood, but it was not until 30 years later that he discovered the potential of the blinking devices for himself. Roboto references the spirit of the early 80s and 90s (Kraftwerk, Giorgio Moroder, Boards of Canada) but is also an intersection where Repetto and Roboto merge and become the melting pot for the past 34 years of Angelo's musical experience. His tracks reflect a variety of approaches to music as such. It's not a postmodern game of citation but more an exploration of his own musical background and the roots of techno associated with it.

A process that reveals a fruitful as well as destructive potential: As soon as familiar beats appear in a track, Angelo deconstructs the sounds until they develop their own poetry. The Light Ceremony is the emblematic title of the first track on Roboto, in which the affinity to the origins of techno manifests itself clearly. There is something of Tangerine Dreams' early work, a wild kraut rock aesthetic and cosmic/Balearic vibes, disrupted by hypnotic trance elements. Repetto creates a density that transports the senses into unknown soundscapes. Ominous dissonances spill over into spherical narratives that snatch the senses from the here and now.

„The sound that you have in your head and the sound that comes out of you are often two different things. Bringing this dissonance in line is the biggest challenge. To produce music that is in tune with itself, for me, that's the definition of good music. And it's not about quality, it's about the 'vibe'."