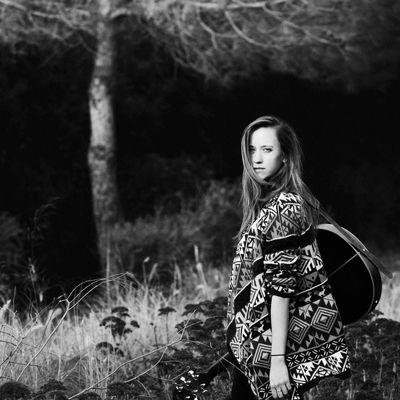 Folk/Country, Folk, Zürich – Even before Anna could speak, she spontaneously sang the children’s songs that had been sung to her by her parents. Of course, this musical talent... Read Biography

Even before Anna could speak, she spontaneously sang the children’s songs that had been sung to her by her parents.
Of course, this musical talent did not stay hidden from her parents. Even at the tender age of five, Anna already had her first guitar in her hands. With three accordions in her baggage, she was already equipped to accompany the usual folk songs. And thanks to her father, who grew up in the USA, she had plenty of contact with the old standards of America’s song repertoire.
From then on, the guitar was the standard accompaniment for Anna’s voice.

At the age of 14, Anna joined her local school band “Panhandles“ and won the 2001 Band-it Contest. This meant that she could record a CD.
During her time at the grammar school, Anna got to know new musicians, and with them she formed a new band - Sphère.
In 2006 Sphère took part in the Radio Argovia Song Contest. Their song “Luck of the Draw“ made them winners for that year, and was played on the radio every day.
Shortly afterwards the band recorded their album “Once upon a place“.

After leaving the grammar school, it was clear to Anna that her passion was for music.
Once she had successfully passed the entrance examination, she began her studies in the jazz department of Zurich university of art, majoring in song.
Her studies, and her contact with other musicians at the school, opened new horizons for Anna, and took her music in new directions.
Numerous concerts followed, which confirmed that Anna and her voice could attract a huge audience.
In 2009 Anna completed her Bachelor degree, and won, for her project, the sponsorship award of the Zurich University of Art.
In the Summer of 2009 Anna and her band were invited to the Jazz Festival in Montreal
In the Spring of 2010 she got an invitation to the Jerusalem Academy of Music and Dance, where she performed two concerts with her music colleagues.
In Autumn, 2010 she recorded her CD „Four Acres and no Horse“, which will appear in January 2011.