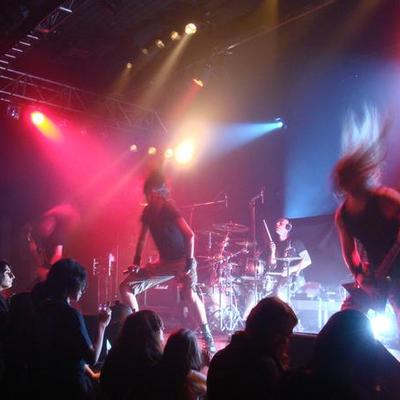 ARKHAN came to birth in 2002 when Chris (guitar/sample, ex IPSUM), Greg (vocal, ex IPSUM) and Stephane (guitar/synth, Near Death Conditions) joined forces. The aim of the three swiss musicians was to combine their wide background of influences (death, black, trash and Rock'n Roll) to create a heavy, exciting and powerful music.
The band recorded their first album "Dead End" in 2003 and promoted it through a series of live appearances and street promotion. Encouraged by the positive feedbacks, the band took a small break in 2005 to work on new material and record their second full length album called "M.A.C.H.I.N.E.". The new tracks saw the band taking a slightly different approach in order to add more groove and catchiness to the music. M.A.C.H.I.N.E. was recorder, mixed and mastered by Chris himself during summer 2005 and released in France during Mai 2006 through a one album contract with Manitou Distribution. Joined by a new bass player (Loic, Your Own Decay / Soulless), the band promoted the album through lives in most of the underground stages of Switzerland.
Unfortunately, year 2007 stopped the progression of the band: Chris broke is right wrist, Greg had some major medical problems with his throat and Stephane decided to leave the band...
But this was not the end... Arkhan finally found a real drummer (Stephane from Cripple God) and started to work on new songs. Three new tracks were recorded during summer 2009 and Arkhan is now looking to play as many concerts as possible!
Are you ready for some hyper speed drum aggressions, intense and groovy guitar riffs and devilish vocals? Are you ready for the death metal machine?