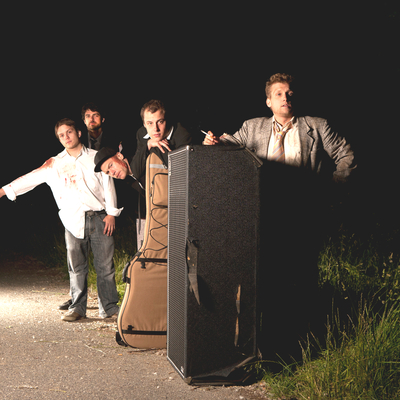 Rock, Luzern – Back to the future It’s all about the music: in times like these, where countless revivals, floods of “The” bands and an almost compulsive... Read Biography

Back to the future

It’s all about the music: in times like these, where countless revivals, floods of “The” bands and an almost compulsive fixation on club compatibility are cementing, even dogmatizing the market. In times where much is overproduced, softened and electrified, where Auto-Tune and 90ies-Scooter-Eurotechno-synths go hand in hand, where rock music can often only be kept alive by injecting it with techno… In times like these, music aficionados long for mainly one thing: the tried and trusted with a twist . --- Real, fresh, demanding, leading but not heady, suggestive, inspiring, brash but not far-fetched. Transporting emotions, as music does. Real music. A tour of the common music channels makes this wish appear as a superstition. An artificial kind of superstition, as other things do exist that promise improvement, like: Artificial Superstition!
Without enslaving themselves or getting caught up in a stylistic tangle, without sounding dusty or compulsively wanting to sound hypercreative, the young Swiss band “Artificial Superstition” manages to focus on what is essential in music yet still treads on new paths. Their music is about transporting emotions, setting off sparks, capturing, kidnapping and captivating ears… leading them into an acoustic abyss, on flights of fancy, into the depths of sound and into the machinery of music. Into the fantastic thicket of the musical jungle. Their music is rock, the band is definitely prog: the 5 band members consist of the following instruments: 2x bass, 1x drums/percussion, 2x guitar in combination with vocals, synthesizer-electronica and also a human beat box. Even though classic song structures form the basis, the constricting cast is cracked open like a coconut over the coffins of the founding fathers, the gushing milk sending its drinkers into an intoxicating orgy of sounds. There is a lot of going on in these songs that consistently blow the 3 minute frame. Great respect is paid to a finely structured build, luring the ear into the depths of the forest, without the help of a Hansel and Gretel trail of crumbs. The ear listens closely, wraps itself up, floats along and follows. Suddenly, a wormhole to another dimension appears, yet the horizon is still in view, the ear obeys and goes on the journey, is challenged, fucked and richly rewarded. In the end, it finds itself at the beginning, possibly somewhat confused yet richer. Back to the future. “Artificial Superstition” play music that unleashes and breaks the mould… just music really. Real music.
“Artificial Superstition” was founded over a year ago and consists of members from the regions of Lucerne, Winterthur and Basle. After extensively dealing with their own compositions, the band is now in the middle of playing various concerts during the summer, in order to present themselves to the general public.

Registered since over 10 years
Last login on 21 December 2012