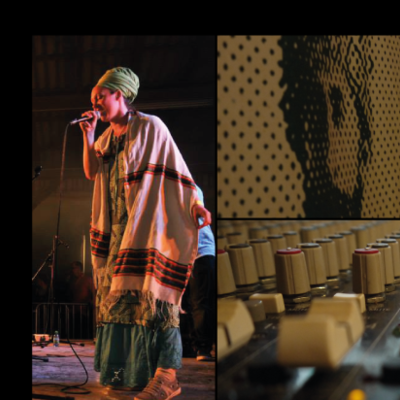 Reggae, Geneva – *Art'Ital* has been founded as a branch of UPfront Music in 2012 by Sista Sherin & Dub Soljah. Art'Ital is creating, producing, publishing &... Read Biography

*Art'Ital* has been founded as a branch of UPfront Music in 2012 by Sista Sherin & Dub Soljah. Art'Ital is creating, producing, publishing & spreading out Roots Conscious Ital Arts of all forms through the inspiration of HIM Haile Selassie & Empress Menen I. In Music, Visual Arts, Communication, Edutainement & Food... there's not one without the other... Art & Ital !

Art'Ital Family will be touching stages with various approaches. Always based on the Art'Ital Duet (Dub Soljah & Sista Sherin * Selector & Singer) on Sound System or stage PA, we also propose an extended list of singers to join us on stage. Besides, Art'Ital will also deliver on special occasions, from the summer 2013 'Live Dub Shows', with a stage version of the studio, mixing live the riddims & dubs. Unplugged Performances or Various Art'Ital Workshops & Cultural Events are others very exclusives and uniques items from our Cultural Basket.
*Guiding Star* is the first project, the fruit of one year of common, joyful & intense works. During the making of those 9 songs, all voiced in the UPfront Studio, a new blend of songs could be created… with 'art'ital' deep spiritual, militant, healing & praises lyrics. RastafarI for your appetizer, your starter, your main dish and also for your dessert. 9 deep songs followed each by their dub/instrumental version, to be released on CD (spring 2013), and also step by step on vinyl.
Sista Sherin has been working since one decade mainly on the German speaking area, having vinyl releases with several labels such as Debtera, Jah Free & New Flower. All her songs are made of spiritual & lyrical RastafarI vibrations, exposing outernationally her unique style. Sista Sherin definitely sounds like… Sista Sherin !
Forward on a joyful RastafarI Highway, she defines her livication as a spiritual healing mainly through music but and all arts... "fighting" with Love and Light for a positive vibration on Earth. From her early days singing in sound system, she has found herself in perfect Inity with Dandelion Family (Ger), and has then captured the audiences of many other well established stables, such as Shalamanda (Aus), Jah Vibes in (Ger), Jah Roots Hi-Fi (CH) and more.

After being operator in the Cultural Warriors Sound System (1998-2012), Dub Soljah, based near Geneva, is now totally focused on the UPfront Music works & live performances. Selecting, Making Riddims & Dubs and Producing, he delivers a full experience from the Revival Foundations up to exclusive Dubplate selections either from UPfront Music or various producers inside the Network.
DJ since 1995 - as Dub Soljah -, but also Journalist, Graphic Designer & Radio Manager since 2001 - as UPfront Roots Network -, he has now spread out his personal touch in the Roots & Culture RastafarI music in all the forms of edutainement & publishing. Militant & Cutting Edge with no compromise - but strictly dubwise -, he's livicated to the message in the Music.