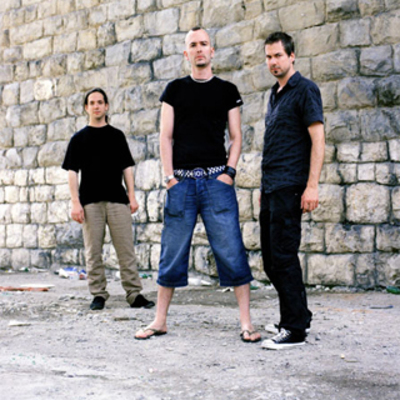 Asphalt Jungle plays contempory intelligent clubmusic that can best be described as breakbeats.
Live they can be found in two completely different situations:

Number one would be the quite common and known concert situation. Stage, concert lightning, being a live band that can rock the audience and take them onto the asphalt jungle journey (as they did as support act for Asian Dub Foundation at the Rohstofflager ZH).

Number two, and that's where they come from, the band plays in the framework of partyevents, surrounded by DJ's. The band is also a part of the party, integrated in the event at hand, also from the light- and stage-design and prefer not to be "specially featured". AJ wants to interact with the public in an alternative way compared to the DJ sets. They accomplish this with the absence of samples and drum-loops, because it would restrict the dynamic's and tempo of their open concept. Instead AJ attempts with their punctual approach to rhythm and harmonies with regards to the contrast of the limitations of studio programmed music. Though the live-instrumentation doesn't give a way to an over-produced sound, giving way still for improvisation and quick interaction between the band and very much so with the public.

One could say it is the main mission of Asphalt Jungle to keep the public feeling they are a vital part of the sound they're hearing and the show they're attending.

Registered since over 14 years
Last login on