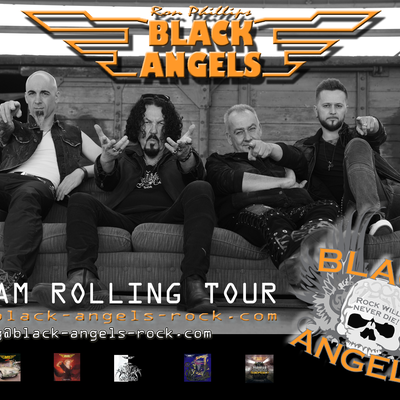 Hard Rock, Classic Ha..., Schaffhausen – If you leaf through the young book of Swiss rock history, you will not be able to pass the BLACK ANGELS from Feuerthalen )near Schaffhausen, CH) in... Read Biography

If you leaf through the young book of Swiss rock history, you will not be able to pass the BLACK ANGELS from Feuerthalen )near Schaffhausen, CH) in the late '70s and early' 80s. Highly praised, successful in the Swiss charts, toured all over Europe, and a rocking house number. And then? After the fourth grandiose album the angels just stop.
Not without reason, and here are various rumours wafting through the scene. Two things are fact: the founder of the BLACK ANGELS went to the monastery and a brilliant deal with Whitesnake, turned out to be an expensive air number. But since 2009 no one asks why. Because: they are back and more rockin’ and more present than ever.
Ron Philipps, the frontman of the BLACK ANGELS, brought the band back on a rocking track. Since 2009, the quartet has been touring on national and international stages. Longer and livelier than in the 80s, the boys board the stages. Rich live experience paired with the rocking zest for life and the fun of music are on the agenda. Honest and solid, the BLACK ANGELS offer a solid classic rock menu in a contemporary guise - but not at all according to the age of the protagonists.
No struggling with the past. Here's a fresh band starting, making each concert to an emotional rock experience. The audience immediately notices that this is not just a fired show, they know that here music is offered, which goes straight from the heart, in the stomach and feet, as result the audience is taken along on a trip.
After years of silence, the album "Changes" set a landmark milestone in 2009 with the new line-up. This will now be continued. With "Steamroller" is refilled and who hears the songs, notes that the bar has been raised much higher. New arrangements are waiting to speak through the ear of the listener all the senses and simply fire a volley in good spirits, which then ignites in a brilliant experience. You can hear and notice, this is far from the end, so much joy of playing sprays out of the grooves.
Here, the BLACK ANGELS took deep into their repertoire and under the wing of HELLOWEEN drummer Dani Löble, the songs got a modern touch, and were recorded and produced together with Connie Andreszka of CREMATORY and owner of OMNIVERSE MUSIC.
The result: 12 songs are reflecting all facets of the BLACK ANGELS. The distinctive voice of Ron Philipps thunders the songs with a force to the listener who spans the thread from one strong song to another. Consistent choruses stay in your head right away, and you never tire of listening to songs several times. The rock aggregate is powered by the rhythm section Marc "the shark" Weber on drums and Michael Enders on the bass, which give all the numbers the necessary boost. With the new man on guitar, André Bradka, the black angels are ready to rock the stages again. See you….
The CD is on the band's website from now. And of course, a vinyl edition is also available.

Registered since about 13 years
Last login on 2 December 2019