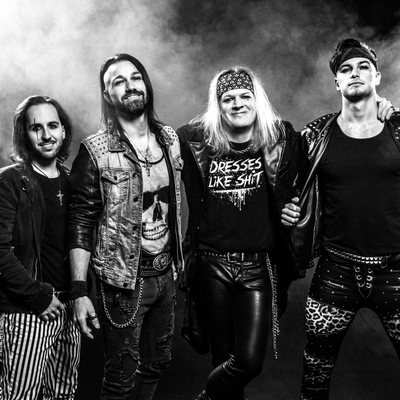 Rock, St. Gallen – Black Diamonds are the unmistakable proof that Rock n’Roll is neither dusty nor old fashioned. Since the band was founded in 2004, the four guys... Read Biography

Black Diamonds are the unmistakable proof that Rock n’Roll is neither dusty nor old fashioned. Since the band was founded in 2004, the four guys from the St. Gallen Rhine Valley (CH) have skillfully combined hard rock with catchy melodies. The energetic live show is generously enriched with glam rock elements: black eyeliner, hairspray, Hello Kitty shirts - in short: everything that Pandora's make-up box has to offer.

«If you like crazy and perfectly played rock in the style of the 80s, […] seeing Black Diamonds live is a MUST. I can only deduct points for the too short set.[…] "
(Live Review Rock Magazine 2017, 9 out of 10 points)

In 2017 the Black Diamonds released their third studio album "Once Upon A Time" and set out on a three-week European tour as the opening act for H.E.A.T (SE). In the following year they accompanied Crystal Ball (CH) on their tour across Germany. There were also other concert highlights such as the opening of the Bang Your Head Festival in Balingen (DE), the Rock The Ring Festival in Hinwil (CH) and the HEAT Festival in Ludwigsburg (DE).

In March 2021 the new album “No-Tell Hotel” will be released on the record label Metalapolis. The band's own hotel opens its gates: From the common casual killer to the retired syndicate boss, everyone is welcome to hide comfortably and elegantly here. The songs tell the gripping stories of the guests and leave no detail out. Be ready for a massive load of rock and glamour once you step through this door ... Welcome to the No-Tell Hotel!