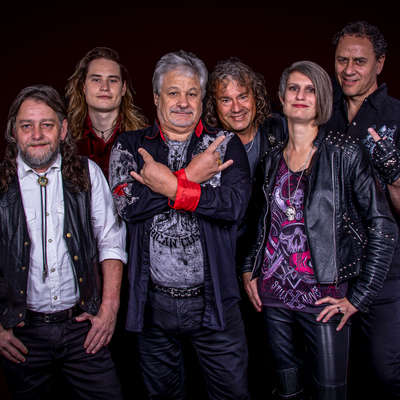 Melodic Hard Rock, Luzern – Veteran Swiss Melodic hard rock band BM-SMITH are releasing their new album “Turn Me On“, which in fact is their first full length. This band was... Read Biography

Veteran Swiss Melodic hard rock band BM-SMITH are releasing their new album “Turn Me
On“, which in fact is their first full length. This band was founded in 1972 (!), by the brothers
Bachmann (BM) and Martin Schmid (Smith), and while today there is no original member,
since the 80’s singer and guitarist Mark Portmann and keyboarder J.J. Andersen have been
holding the flag up and rocking the clubs of central Europe.
BM-SMITH released several singles all over the ’80s / 90s, and now all these have been
freshly recorded with a crisp modern production. In the first half of the Eighties future
GOTTHARD guitarist Mandy Meyer was part of BM-SMITH, and as homage the band has
recorded here as well his penned song “Looking At You”, the classic tune first recorded by
Jimi Jamison’s COBRA and later by GOTTHARD as well for their album ‘One Life One
Soul’.
BM-SMITH’s sound & style brings to mind the likes of ZENO, WHITESNAKE, FAIR
WARNING and of course GOTTHARD, and not only we find very good ’80-90s written
songs on “Turn Me On”, but also a polished bright production.
Aside from their version of “Looking At You” listed as bonus track, BM-Smith’s new album
features ten more melodious hard rockers which transfer the spirit of the early 80s into the
modern era.
Opener ‘Turn Me On’ rocks with great riffs, the ‘Bleed for love’ structures is where the
ZENO comparison arises, ‘Love surrender’ is a pumping melodic rocker with a strong chorus,
then midtempo ‘Angel Eyes’ brings the midtempo AOR to the table.
There’s other pretty killer rockers here such as the killer ‘Knot in my head’ (some ’85
BRONZ here), while ‘Not too late’ will remind you at places early Eighties SCORPIONS.
Somehow, the very strong ‘Running free’, with is rocking punchy AOR waves brings to mind
a 1985 TYGERS OF PAN TANG song.
And after many years with live concerts, finally BM-SMITH decided to put these songs on
CD – “Turn me On”, is a recommended album for the Melodic Hard Rock / AOR listener
with an ear for the classic sound from the genre.