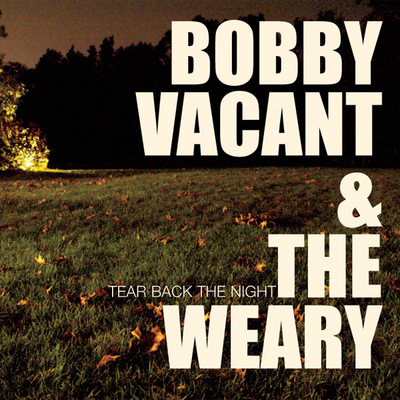 In 2007, Bobby Vacant (a.k.a. Tom Derungs) began putting his poems to music and sending home-made tapes from Switzerland to Luxotone Records in Chicago. As they arrived, The Weary (a.k.a. Luxotone founder and philosophy editor George Reisch) immediately recognized the deep existential void etched by Vacant’s images, words, and haunting melodies. As the album took shape, he joked (with apologies to Liz Phair) that it sounded like a song-by-song response to the novels of Albert Camus. Or the depression-era photographs of Dorothea Lange.

Now that the album is done (Release date March 31st), Tear Back the Night looks straight into the absurdity and loneliness of life in our time. “Dylan’s Dead” invokes Nietzsche to update Don McClean about the day the music really died (“You’re the one said god is dead/flew a jet right through his head”). The achingly beautiful “Fair Heart” stares deep into love’s gashes and wounds (“You say you hurt/The world has left a burn”) while “Waveflowers” charts a course through our metaphysical desolation (“Nothing lasts for long, Not stars or sand or sea/But we float on . . .”).

Still, Tear Back the Night finds salvation in its darkness—in the truth of Vacant’s deep, reedy baritone, in The Weary’s steady, reassuring guitars, and especially in the ever-loving arms of 70’s-style orchestrations. Sounding at once fresh and nostalgic—The Moody Blues, Donovan, and Joy Division came up several times during this collaboration—Tear Back the Night will stand out in the expansive but often sterile indie landscape. No mere display of wit or wordcraft, or a mid-life attempt to launch new careers (Derungs and Reisch are in their 40s and have day jobs), Tear Back the Night is simply a compelling and beautiful portrait of contemporary alienation wrought by a talented new songwriter awestruck by the nothingness of it all.

Registered since over 13 years
Last login on 22 September 2012