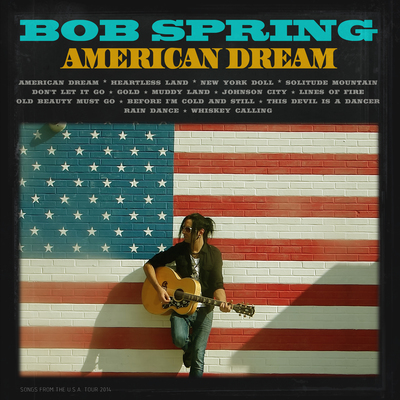 Dark Country, Zürich – “His confidence in performance tells the tale of a man that has no need to prove himself, what you see is what you get, and with no airs and... Read Biography

“His confidence in performance tells the tale of a man that has no need to prove himself, what you see is what you get, and with no airs and graces, he does exactly that, right in front of your eyes from centre stage. Bob hones his style to one of his own creation, giving us a unique twist on “Alternative Country”, where he speaks of not only the heart and soul, but real life situations, experiences and observations giving us a first-hand view into the life of a true professional.”
— Ian Davies - International Music Journalist and Director of Core Global Media

Living the true rock n roll lifestyle as a singer/songwriter, Bob Spring has spent many dedicated years trying to cut his teeth in the industry and perfect his craft. One thing that stands out with this truly inspirational performer is the love of the songs he has written as he almost cradles them from the footlights, almost nurturing them, as if they were meant as a personal performance just for you. Each track has been carefully crafted to give every nuance time to evolve in his mind, before releasing it to the world. His confidence in performance tells the tale of a man that has no need to prove himself, what you see is what you get, and with no airs and graces, he does exactly that, right in front of your eyes from centre stage.

With a Swiss/Italian/American origin, Bob hones his style to one of his own creation, giving us a unique twist on “Alternative Country”, where he speaks of not only the heart and soul, but real life situations, experiences and observations giving us a first-hand view into the life of a true professional. His journey started at the tender age of five as he took up the violin, but as soon as he discovered his voice, it left him with not only a problem, but a dilemma also, as both elements don’t go together. A choice had to be made, and in Bob’s case it was the right one. Luckily the transition from Violinist to Guitarist was an easy one as the voice was already there. By the age of fifteen, Bob started his first band, but it wasn’t until 2000 that Bob’s success started to shine as the lead singer of a band called “Backwash”, achieving International Recognition, including a record deal with the Houston Texas based label Perris Records.

In 2007 he started his solo-career and since then wrote the incredible amount of more than 600 songs – mostly produced and arranged in his home studio. “I am a painstaking songwriter, even though I often find it pretty hard to stay focused” he describes himself. Bob released his first solo EP “West End EP” (2009) followed by the LP “Run From Death” in June 2013. In May 2014 he released his second full length album named „Dust And Arrows“. October 2014, marked the start of The USA Tour starting in New York, and continued to blaze a trail through Pennsylvania, Maryland, North Carolina, Tennessee, Texas, Nevada, Arizona and California which lead to nineteen performances across the United States of America, from small bars in New York City to legendary venues like "The Basement" in Nashville, Tennessee, the WDVX Blue Plate Special Radio show to the Whisky a go go in Hollywood, Los Angeles, California.

2015 marked the start of Bobs first Album with his brand new live band. "The Calling Sirens" and played at the world renowned Montreux Jazz Festival in Montreux, Switzerland which resulted in performances with Paolo Nutini, Sam Smith, Portishead and many more taking Bob on to record three LIVE videos with 5 cameras. In 2016 Bob dedicated a FREE album to the late Michael Kral called “Flesh and Rust”, a great tribute to a man who was almost a Father figure to Bob over the years and close personal friend. Since then, Bob has released several new singles such as "The Darkest Place", "Spit Me Out and Lick Me Up" and "Gone when you wake", including a compilation of cover songs that he had performed over the years. MORE...

Bob likes touring, especially touring the States, where in 2012 he played shows across the country including New York, Nashville and Los Angeles at well-known venues such as the Hotel Indigo (Nashville, TN) or the Whisky a go-go on Sunset Strip in West Hollywood. The USA Tour 2014 kicked off in October in New York going on through Pennsylvania, Maryland, North Carolina, Tennessee, Texas, Nevada, Arizona and California. Bob's highlights of that tour: The legendary "Basement" in Nashville, Tennessee and the Blue Plate Special on WDVX in Knoxville, TN. The Live Radio Show reaches out to millions of listeners across the U.S. and beond.

He recorded a second album in 2014 with his band “THE CALLING SIRENS”; “Bob Spring & The Calling Sirens” was released in March 2015
„I always knew that it’s not going to be easy to become a professional musician, especially nowadays and being on tour for 2 months surely is a physical and a mental challenge. Still I think I get rewarded richly for all the hard work when I see so many people in so many different countries and cultures. I never would have met them without my music .”

2019:
• Recorded and produced the next Bob Spring solo album. Expected to be released in January 2020.
• Continuously played solo shows as well as with the Calling Sirens
• Released the Single "Beautiful"
• Supported the Canadian band "Madison Violet" at the MAUZ Music Club
• Bob Spring & the Calling Sirens released the "Dark Countries" Vinyl at El Lokal in Zürich

2018:
• Bob Spring & The Calling Sirens released their second album "DARK COUNTRIES" which gained a lot of attention and radio airplay. The album has been awarded with "Best Album of The Year" by Switzerlands only Music Magazine LOOP.
• Bob Spring featured on the On song International (Australia) platform which calls him "A generational talent! "
• Played many solo shows as well as with the Calling Sirens and recorded another 100 songs.

2017:
• Showcased the upcoming BSCS Album at MAUZ music club playing the new songs in front of an audience for the first time.
• Released the single "The Blue For The Hope"
• Recorded the upcoming Bob Spring & The Calling Sirens album
• Played many shows at well known summer festivals.

2016:
• Released a FREE Album called "FLESH AND RUST" which is dedicated to Michal Kral who was, so Bob, a father-like and a very good friend of his. Michal Passed away in Oct. 2016.
• Bob Spring & The Calling Sirens toured Ireland in May playing well known venues.
• BSCS released their 2016 single called "Hold on restless heart" which is a good preview of the upcoming, second album's perception. The second Bob Spring & The Calling Sirens album is to be expected in 2017. Stay tuned!
• Bob Spring released several new singles such as "The Darkest Place", "Spit Me Out And Lick Me Up" (watch the video) and "Gone when you wake". Further on he released all the COVER SONGS he recorded during the last few years, the download of the 2CD album is totally free but also available as a limited, handmade 2CD Digipack for the die-hard fans.

2015:
• Released the first LP Album with his brand new live band "The Calling Sirens". Check it out here!
• Played at the worlds famous Montreux Jazz Festival in Montreux, Switzerland along with Paolo Nutini, The Alabama Shakes, Sam Smith, Portishead and many more.
• Recorded 3 LIVE videos with 5 cameras. One shot videos. Two of them have already been released through Social Media Channs: "Guess I'm not a friend" and "Monuments of our time"
• Wrote and recorded many more songs – release planned as the next "Bob Spring & The Calling Sirens" record.
• Released the handmade "Limited Edition 2015" and the singles "Barren Run" and "Country Gent"
• Released the side project singles of. Curly Tonic x Bob Spring

2014:
• Played 19 Shows across the United States of America... From small bars in New York City to legendary venues like "The Basement" in Nashville TN, the WDVX Blue Plate Special Radio show to the Whisky a go go in Hollywood, Los Angeles, California. All shows listed here.
• Release of the album „Dust And Arrows“ – The „REAL“ Bob Spring Album. 15 Songs, Home recorded and 100% authentic.
• Recorded about 400 Songs.
• Release the singles „Tijuana“ and „California Sun“
• Recording the “Bob Spring & The Calling Sirens” LP

2013:
• Bob Spring supported the legendary Swiss Rockband KROKUS at the fully occupied Volkshaus in Zurich twice! Both shows were sold out with 2800 spectators each! Bob is already working on his next record.
• CD Limited Edition 2013 (unreleased songs in a handmade cardboard digipack. Numbered and signed. Includes a handwritten lyric sheet).
• Bob signs a publishing deal with BMI (USA)
• Played many well known venues such as the Kaufleuten (ZH) and Mahagony Hall (BE) with his new LIVE band "Bob Spring & The Calling Sirens".

2012:
• The official Bob Spring debut album "RUN FROM DEATH" is finally recorded and mixed (by Dave Snow at Sourmash Studio) and mastered (by Maor Appelbaum, Los Angeles, CA). To promote the Album in the USA, Bob Spring and his Band “Bob Spring & The Junkers”, did a small USA Tour in summer 2012. The tour started in New York with 2 shows (Goodbye Blue Monday in Brooklyn and Arlenes Grocery in Manhattan, New York). By car they went straight ahead to Nashville, Tennessee for other 2 shows (Gabes Lounge and Indigo Hotel). After that they did the last 2 shows in Los Angeles, California (TRIP in Santa Monica and the world famous Whisky a Go-Go in West Hollywood)

2011 - 2012:
• Got his band “Bob Spring & The Junkers” together and played many shows, Open Air festivals as well as club shows all over Switzerland. Bob Spring also had his first headliner show at the Piedra Libre Open Air Festival at Freienstein, ZH

2011:
• To push the West End EP (2010), Bob went on tour again. (The first time he went to Honduras in 2009 he did an TV Interview with Canale 4 and played 5 live shows) Hitting Roatan (Bay Islands) Honduras C.A in 2011 got him even more shows and radio interviews, not only in Central America but around the globe (e.g. Intertank und Macondo in Berlin, Clearing Barrel G.I. Coffeehouse in Kaiserslautern, Germany, diverse online radio stations all over the world)

2010:
• Released a conception EP called "WEST END EP". It features 5 songs and each of them has its own true story.

2006:
• Gained a record deal in the U.S.A (Perris Records) with an international distribution deal (ZYX) with his then time Rock Band Backwash and released an EP (Feel Rock - 2003) and an LP (Kick Ass! - 2006). Played more than 300 shows (Backwash and Solo) in Europe. Headliner shows and of course support shows for Rock legends such as Krokus, The Quireboys, Blood Hound Gang, Turbonegro….

The full list of all the past and upcoming shows can be viewed on Hhttp://www.bobspring.com/shows