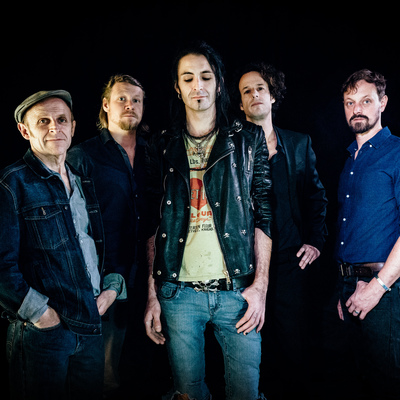 BOB SPRING AND THE CALLING SIRENS

Rock, Zürich – MOTHER'S, the preliminary single of the upcoming album DARK COUNTRIES (October 2018) already gives an idea of the sort of light in which Bob Spring... Read Biography

MOTHER'S, the preliminary single of the upcoming album DARK COUNTRIES (October 2018) already gives an idea of the sort of light in which Bob Spring & The Calling Sirens will drown this Fall! "The noise and the city lights flash away my pain. Oh Mother, what happened to my good old dream?" We all know the point of silence, which can happen anywhere without being announced. The moment that flushes away the noise and bustle of the city and makes things appear as they really are ... without any distraction: pure, unadorned, sad and at the same time overwhelmingly beautiful.
THE ALBUM – DARK COUNTRIES (release date: October 19, 2018)
In the midst of God’s forsaken land, somewhere between sun-set and dawn, where silence lies like an invisible blanket over eternity, and longing is borne by the waves of long-gone oceans, Bob Spring & The Calling Sirens have made their home, expressing the beauty of despair through their warm and sombre sound. Bob Spring’s voice weaves a soothing web of bearableness, while the Calling Sirens’ calm and composed style of playing seems effortlessly reconciled with destiny.
DARK COUNTRIES can be seen as a musical equivalent to a Jim Jarmusch movie; images made audible, resting within themselves and making live to the senses ever-present but hidden stories which are now revealed to the listeners.

Registered since about 2 years
Last login on 19 December 2018