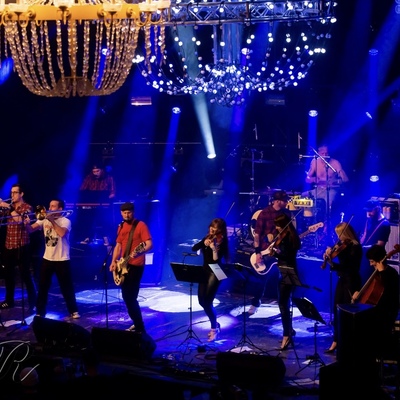 Bonkaponxz is a eight-headed band from Graubünden, which could be called the worlds best still living Horns & Roll band.

1995: The two guitarists Marc Hosig and Andreas Ulmer team up with the drummer Mirko Demarmels and play in his cellar the first punkrock riffs.
1995 - 1998: The band is supported by two members. These included Kenneth Schüpbach on the bass and Mathias Ulmer on the saxophone. The style changes from punk to ska.
1998: The first concert. In the Jugendhaus Chur, the five boys under the present name Bonkaponxz will play their first concert in the program of Lunazone.
1998: With Mauro Crameri and his trombone the sixth member is brought into the band. Other concerts follow.
1999: The trumpeter Fadri Brunold joins the troupe as a seventh member. The band is complete.
1999 - 2002: Various concerts are taking place all over Switzerland together with Reel Big Fish, Nguru, Snitch, Skaos, Spitfire, among others. Remo Hosig takes the job as cashier, photographer, manager and girl for everything. Thanks at this point.
2002: He is guest at Fritsch at the Sculpture Studio in Chur. The first CD is recorded.
29. 11. 2002: The first Bonkaponxz CD "Mission Accomplished" is released.
2002 - 2004: The tour to the CD follows the whole of Switzerland. This time with sizes like, MU330, Vanilla Pod, Scarface, Persiana Jones and so on. Tutti comes to the team as a mixer, merchandiser, cook, harmonica player and keyboarder. Merci.
2004: Bonkaponxz stands for the next album in the studio in Grünenwald, together with Dan Suter and Fumo.
14. 1. 2005: The Bündner Ska and Punk Sampler "Skalanda" is baptized. Five songs by Bonkaponxz are on board. The Skalanda Tour is started.
11. 3. 2005: The second Bonkaponxz disc "Horns'n'Roll, Baby!" Is baptized. Musically you have now arrived at a mix of Kickass Rock'n'Roll, Punk and Ska .... Horns'n'Roll eben.
2005: The Skalanda Tour continues.
2005 - 2006: Mirko Demarmels leaves the band, followed by the first concerts with a new line-up.
2006: The next CD in the form of an EP with six to seven songs will be recorded in Chur in Blue Wonder Studio with Dani Stolz at the controllers.
After several concerts, the next CD was recorded in Winterthur at Admiral James-T. In April 2012 the CD was launched.
In Graubünden landed the CD on place 2 of the Grischacharts. This was followed by the tour of the CD the great stampede, among others with stops in Copenhagen and various Openairs.
At the moment, new songs are being worked on, of which 4 songs already sound suspiciously good.
Last year (2014) we were able to do our best with Russkaja and Bonaparte on the big stage in the Stadthalle.
Now we are baptizing the 5th album with the name As far as you can and there is no end in sight, look forward to your Bopx-ler