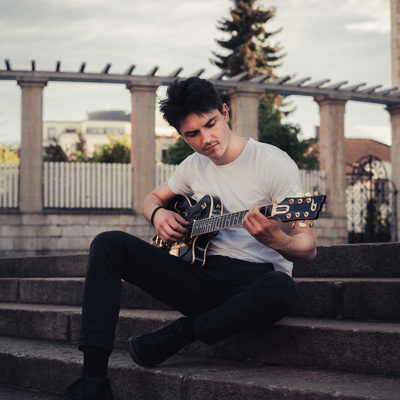 Pop, Luzern – Brian Paul is a young artist with a great deal of experience in a wide variety of musical genres. He began to develop musically at a very early... Read Biography

Brian Paul is a young artist with a great deal of experience in a wide variety of musical genres. He began to develop musically at a very early age, playing the viola da gamba for 5 years, moving on to cello, stopping off for piano lessons and finally deciding to pick up the guitar. He has always been fascinated by music and how he could express himself through it.

At the age of 15, he played in a rock band for 2 years as a guitarist and second vocalist. During this time he got to know the musician's life better, and especially the concert life, which inspired him a lot. Due to member changes this band constellation unfortunately dissolved and only a short time later he was asked to join the metalcore band, A Lost Game, as a bassist and clean singer. Until this day he is an active member of this band.

Still to be able to life out his passion for writing and playing pop music, Brian one day decided to start his own solo project. With his debut song „Out Of Control“, that was released on the 27th of August, Brian already managed to get aired on national radio which quite took him by surprise.
There are many more songs to be expected from him, be it a bit calmer or a bit wilder, electronically influenced or accompanied by the piano, you‘ll be able to hear it very soon!