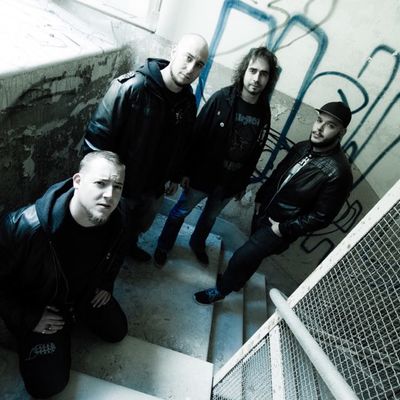 In the year of 2007 Tobias John Bänteli (Vocals & Guitar) and Alessandro De Cicco (Drums) founded Broken Fate. For almost 2 years they filed on the playing and technics and wrote theire first songs.

In November 2008 two additional musicians joined them to a jam-session and it didn`t take long time to see that with Roman Leeser (Lead Guitar) and Dario Stutz (Ex-Tribes of Cain, Bass) the Band was complete.

Beginning of 2009 after intensive writing, Broken Fate went to the studio of Roger Fehr (Ravenheart) to produce their first demo-cd with the songs: Broken, I don`t fall alone & All around me. In April 2009 they had their first official live-gig with a n audience of over 80 people, followed by many other gigs the band has been touring the stages of Switzerland in differend club-locations and halls also through out of Germany.

The first music video of Broken Fate was created for the song "Take you away" in February 2010 (Germany).

Jul 2012 - Reunion:After one year the band decided together with Dario Stutz the reunion of Broken Fate. After preparing for the next EP (Rising to the dream), which was recorded and produced in the studio "Little Creek" in Gelterkinden (CH) by V.O. Pulver in September 2012. Followed by more and more and even larger concerts (over 100) with various bands, Broken Fate had even better prevailed in the music business.

During the summer 2013, the band worked on the firs t album.It was recorded and produced in the studio of R.D. Liapakis (Mystic Prophecy,Devils Train) & Christian Schmid in april 2014.
In August 2014, the first album THE BRIDGE BETWEEN was finished.

Together 12 songs that show the sound of Broken Fate in the best shape and consist of hardness and great melodies.In January 2015 our former lead guitar player Roman Leeser was replaced by our new lead & rhythm guitar player Leopold Stadelmann. Roman Leeser decided to leave the band in case of personal reasons in career terms & private changes in his life. We wish all the best & good luck for Roman Leeser's next future steps & we stay still as friends.

Currently they set on active support and promotion for it.
Now the bridge will be crossed!Broken Fate an absolute must see , hear and feel!!!

Since June 2015 the Band is in Contract with the Label Massacer Records . On the 6. November they released their Debut Album "THE BRIDGE BETWEEN" Worldwide.

The Album counts 15 Songs a total of 74 minutes playing time.

Also the Band had to say Good Bye to their old Bass-Player Dario Stutz , because of that they got a new Family member in Oktober 2015 called Patrick Von Gunten , Witch from then on Broken Fate as the new bass player enriched.
In December 2015 they recorded their first Professional Musik Video to "Rising to the dreams" in Köln , with Ivan K. Maras and his Crew.In 2016 they planed to go on tour all over the world .
In the fall of 2016, the band went on theyr first real European tour with anvil. The tour leads through Norway, Denmark, Holland, Sweden and Germany. The tour was a good success. In november 2016 Gabriele Sacco has become the lead guitarist and has integrated well in to Broken Fate.
His influence you can hear in the solos on the 2nd album reborn. This Album is the best thing the band has delivered in its 10 year career as a whole package. More catchiness, more anger, big melodies and the lyrics are much more personal and much more mature.

On the 6th of April the 2nd album REBORN was released worldwide via Timezone records (D). One day later on the 7th of April the band celebrated their 11 year band anniversary (11 Years of fate) at the casino in Wohlen AG and also celebrated the release of REBORN. Currently the band has played over 200 concerts throughout Europe.

Registered since over 9 years
Last login on 9 June 2019