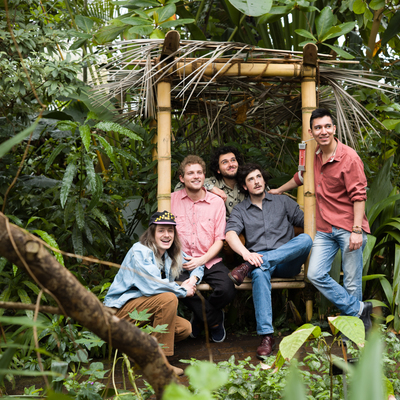 Dream Pop, Zürich – Space, some dream of it, some fear it. And then there are the Bumblebees who dig into it, always searching for new psychedelic textures. Born in... Read Biography

Space, some dream of it, some fear it. And then there are the Bumblebees who dig into it, always searching for new psychedelic textures. Born in Lugano but based in Zurich, the five-piece group draws their influences both from ‘60s-'70s music and from contemporary artists, with a modern approach to their compositions and soundscape. Their passion for psychedelic buzz and dreamy vibes, creates an atmosphere that tempts each listener, inviting everybody to follow them into their space shuttle to explore unknown destinations.
On May 17th 2019 they released their debut album Dancing Dots In The Dark via Radicalis. The new songs have already been played in many shows and achieved very good reactions from both audience and press.
In spring 2020 they released a new videoclip which got featured on LesInrocks and Rolling Stone France to name a few.
Unfortunately, due to Coronavirus they had to cancel their tour in Germany and France.
In 2020 they also released a series of remixes of some songs of the debut album.

They self-released their first EP in 2017 and played many shows in important venues such as SRF Virus 8x15, Rete Tre Showcase, Unilive, Alcatraz (IT). Furthermore they won the music contest Palco ai Giovani 2017 and Emergenza Festival Ticino.

...we just want to pollinate the world with our music...

Registered since over 4 years
Last login on 12 December 2020