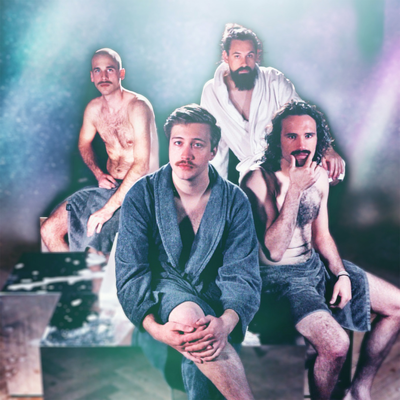 Pop, Basel-Stadt – CARVEL' - BAD DECISIONS AND BETRAYAL It did not start out too badly for the band CARVEL' from the Swiss town of Basel. In 2015, their debut... Read Biography

It did not start out too badly for the band CARVEL' from the Swiss town of Basel.

In 2015, their debut EP creatively called Eins (One) already boasted the party hit What's it All About and the other three songs could be called accessible as well - sometimes even captivating. From the feel of it, at least 33 band contests were won. Audience and experts seemed to succumb to the charm of the quartett from Basel and the paper 20 minutes euphorically titled their article: CARVEL': too big for Switzerland. It seemed that more and more people wanted to hear more and more from CARVEL'.

But then, a series of questionable decisions followed. The four new rock stars could have remained faithful to the secret formula for success of their debut and indulge in fun with groupies and cocaine. Instead, they felt the need to come up with new ideas and harass every first-class producer they could find with their tragedy. Rumour has it, one of them even had already fiddled with dilettantes like Nick Cave or Depeche Mode. Later, CARVEL' shamelessly claimed in public to have learned something from these recording sessions. The result was to be foreseen: The second EP Polarity, published in 2017, dripped with newfangled sound effects, supposedly clever song structures and ruthlessly mixed influences from a dozen genres and several decades. Even the press felt betrayed by this musical mixture, preventing them from sticking one of their beloved labels on the band. Even more perfidious for the listener: Behind the beautiful melodies lurked mostly exhausting, important topics. To nobody’s surprise, the band received praise from the trade press, who compared the jumble on Polarity to the sound of various big stars from around the world.

If I had known how progressive this band really was, I never would have dealt with the likes of them. I do not want to imagine what the wiseacres plan on doing next. Last I heard, they wanted to release only three singles instead of a whole album. Only publishing the good songs - how stupid is that?
In the olden days everything was better. Back then there would not have been anything like CARVEL’.

Spoken from the regulars table