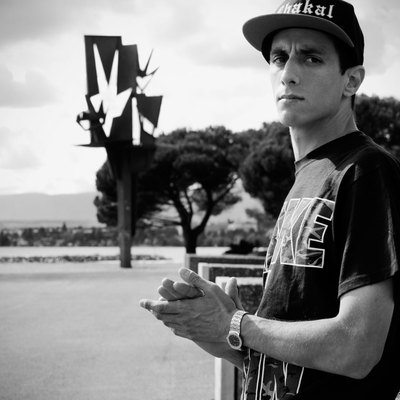 Hip Hop, Vaud – El Hombre Radikal Was borned in Caracas Venezuela in 1978 and raised there until he moved to Switzerland in 1994. Started Rapping in 3 LANGUAGES... Read Biography

Was borned in Caracas Venezuela in 1978 and raised there until he moved to Switzerland in 1994.
Started Rapping in 3 LANGUAGES (Spanish, French & English/Patois) at the age of 16 in 1996 and joined a band called LOS DE LA SALSA, this was one of the founder bands in Swiss Hip Hop and he made his first productions (made 45inches singles) starting in 1999. He produced and issued his first Album "Rap Desperados" in 2002 and it was a success, both musically and economically. This established him as one of the founders of Swiss Hip Hop.

He started working in his solo carrier and made his first solo album: PA’ MI GENTE in 2004. This album contained a song that became a classic: "Rapero Desperado" and was also a success.
He started singing in all types of venues from underground scenes to the biggest and more recognized festivals in Switzerland such as PALEO and Montreux Jazz Festivals.

He started mixing, working and collaborating with the most recognized artists from various parts of the world such as Juju (The Beatnuts) Havoc (Mobb deep) Ramallah Underground, Stress (from Switzerland) and Alozade (from Jamaica) and in 2006 he produces and drops his second solo album entitled : CHAKAL & CO. That same year he went to Venezuela and meet and worked with the best artists from the local scene. He made a song called "El Momento" talking about the political situation and he became politically involved and important to the point he got death threats from armed militias from the chavist regime.

After that he went all over the world and sang in Latin America, Europe, Africa and in the USA. He went on many roads until 2009 when he participated in the making of an European pop band called "Guarana Goal" but this only worked for a year and he came back to his solo career in 2010. He has since worked with many Recognized artists from Latin America, the US and Europe and his third album: THE LOST FILES which was released by the end of 2012.

Chakal Raps in 3 languages FRENCH, SPANISH and to a lesser extent english and he explores many different styles of music and inspirations. While remaining a Hip Hop genre type artist, he is still very open minded. Chakal can make a hardcore hiphop single as much as a traditional easy going
music. From dancehall to rap to latino and back, Chakal is has a long experience in production, logistics, composition and communications.

Registered since about 14 years
Last login on 14 January 2013