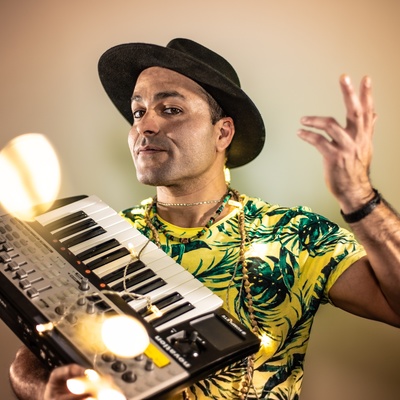 Caribbean, Pop, Rock ..., Luzern – In 2010, a musical band is established in Barcelona Spain that during these years has managed to mix music and energy, carrying a positive message... Read Biography

In 2010, a musical band is established in Barcelona Spain that during these years has managed to mix music and energy, carrying a positive message and a party spirit around the European continent, we talk about Chamito Sound.

Led by Venezuelan musician Esteban Reyes, this group has managed to maintain the fusion between Caribbean sounds with genres such as pop, rock and electronic music, accompanied by lyrics that are seasoned with life and inspiration.

Chamito sound has been characterized by having a live show full of explosiveness, adrenaline, a performance that has made dance to hundreds of people in countries such as:

Highlighting performances at festivals such as:

3 CDs recorded along the way are the sound report of Chamito Sound, a constant sample of evolution and experimentation that characterize the band:

Chamito's new record work is a journey through the world of synthesizers, which are the protagonists along with electronic programming.

Rock, pop, world music, mark the beat in this 8-song CD in which Chamito Sound transmits that passion, joy and positive vibes that characterize it.

"Release the sadness and get up"

"Look, do not pay attention if they tell you that you cannot, just change your way and go for what you want" are phrases that emerge from the message that this new album seeks to convey, as expressed by the artist "is a disk that served me to regain strength in difficult times, to understand that in us is the engine that makes us move forward and that our attitude is the ignition button.

Produced by Esteban Reyes and Giovanni Cuatrera, recorded at LA Casita Solar, Lucerne, Switzerland, mixed and mastering at Accura Estudios, Sicily, Italy, Caribbean arrives to remind us that summer is not a season is a way of life.