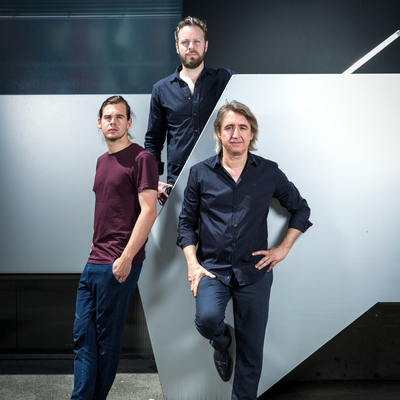 Where and when does the succession of sounds become music? Does this transformation already take place in the fingers of the musician, or do the sounds only add up to a musical work of art in the listener’s ear? Does a summer sound sound different from a winter sound? The Swiss pianist Christoph Stiefel has been dealing extensively with these musical and energetic translation processes for decades and comes up with astonishing results on Embracing, the new CD of his Inner Language Trio.

Christoph Stiefel has been on the road with the Inner Language Trio for many years and selects his respective players according to the current artistic challenges he faces. In the current version of the trio he performs with bassist Lukas Traxel and drummer Tobias Backhaus, both of whom are considerably younger than the 57-year-old pianist. Stiefel does not like to repeat himself in his musical statements; he looks for the new in continuity. And with Traxel and Backhaus he can always celebrate the intensity of the momentum at eye level. Indeed, these two bring exactly the energy and willingness to take risks with which Stiefel can translate rhythmic energy into pure joie de vivre. In addition, they have the maturity and dedication to create a dense and strong mood together in the quiet pieces with few tones.

The piano trio is not only one of the oldest, but above all one of the most conventional constellations in jazz. Christoph Stiefel confesses frankly that jazz is still the most exciting of all art forms for him. And yet, or perhaps because of that, he is looking, within the coordinates of jazz, for individual rendezvous he can use to reach the listener – whom he does not even know per se. By coincidence, he came across isorhythm, a medieval compositional principle with rhythmic shifts used, among others, in the motets of the famous composer Guillaume de Machaut. But Stiefel’s own music is definitely not a fusion of jazz and medieval sounds. It plays completely in the here and now, yet he makes use of the inner tension resulting from isorhythm to embrace the listener according to the motto of his album. In his own words, it is not so much about playing isorhythmically as about playing around with isorhythms. This may sound like a paradox, but one of Stiefel's maxims is that when the concept becomes more important than the music, the music falls apart. In other words, he moves away from the preconceived concept, embracing listeners in the natural flow of things and leaves it to them what they make of the musical offerings.

Christoph Stiefel emphasizes that every musician in the trio has to walk his own path. These three paths then converge to take a common route. “This music is more complicated to play than to hear,” says Stiefel. With this attitude he unintentionally moves in the immediate vicinity of Ornette Coleman's principle of harmolodics, which also specifically aims to translate complex musical structures into simply comprehensible listening experiences. Often enough, however, jazz is exactly the other way round.

The coordinates between which Embracing is suspended could be described with the words clarity and contour. Stiefel’s communicative trajectories are much more oriented to the far more comprehensive and often unfathomable logic of life than to established principles of composition theory. The streams of sound consciousness he triggers remind us here of changeable horizon lines, which one can approach, because the levels are open, and which one can enter. From the autonomy of each sound he develops musical chains of association that leave the virtuoso behind in spirituality. Stiefel, Traxel and Backhaus play a profound game with organic processes such as condensation and disentanglement, which convey themselves to the listener like an open garden and whose differently designed installations invite people to linger as well as to move on in an inspired way. It’s no exaggeration to describe this playing as magic.

The resulting options are unlimited. For boundless music, all three musicians bring along the unconditional openness of shifting their own internal boundaries to finally dissolve them completely in playing together. None of the three protagonists is at the service of each other; rather, each one is an indispensable part of the whole and thus also contributes his part to it. Bass and drums do not accompany the piano, but complete it. As they play, all three feel that there are many different ways to listen to this music. They do not then address the analytical intellect of the listeners, but their creative willingness to engage intuitively and to find their own translations. And it is in these very translations that the inner vocabulary of the Inner Language Trio keeps emerging. Or, to quote Stiefel’s words: “The dimension of ambiguity creates different possibilities to interpret the music.”

An embrace is the transformation of energy from one body to another. Music is nothing else if not this, an incessant flow of vibrations from transmitters to receivers. The Norwegian composer Arne Norheim said it was about no less than unheard-of music. But do we need new concepts to describe the unheard-of, which may not be based on such new principles, but on the archaic dynamics of nature? Definitely not. On Embracing, Christoph Stiefel offers the listener something that can only be said of very few CDs – the wonderful gift of unconditional music.

Registered since over 13 years
Last login on 22 October 2020