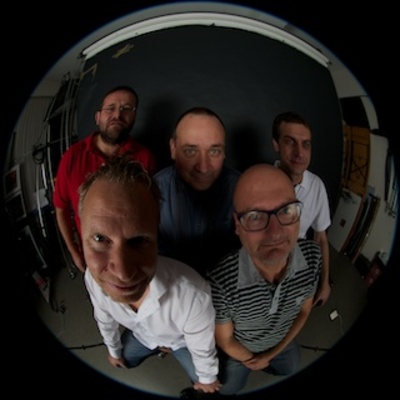 Clepsydra is a Swiss neo-progressive band that was formed in 1990 by Aluisio Maggini (vocals), Lele Hofmann (guitars), Philip Hubert (keyboards), Andy Thommen (bass) and Pietro Duca (drums).
In 1991 Clepsydra released their first album "Hologram", which was followed by the EP "Fly Man" in 1993. Clepsydra then signed to InsideOut, who released their second album "More Grains of Sand" in 1994. This CD included the song Moonshine on Heights, which by many is regarded as neo-prog classic. 1994 also saw them performing two songs on national Swiss TV, a rare occurrence for a progressive rock band at that time.
In 1998 Clepsydra released their third album "Fears", the first album with Marco Cerulli on guitar. In the wake of the album release Clepsydra had a 10 day long European tour and was booked for a concert in Canada on the strength of this production. In 2001 the band released "Alone" with Nicola De Vita on bass. This album came with 3 different album covers: "The Chicken", "The Octopus" and "The Fish".
Following these four albums Clepsydra entered a state of hiatus. At this point they had established themselves as a popular entity among fans of neo-progressive rock, and they were often compared to the likes of Jadis, IQ and Fish-era Marillion. In 2013 Clepsydra announced they were reuniting, with Andy Thommen back on bass guitar and a reunion tour scheduled for 2014. A 4 CD box set limited to 1’000 pieces is on pre-order as of November 2013 to be shipped early 2014 featuring all 4 albums meticulously re-mastered with an hour of additional bonus material and unreleased material.

Registered since over 8 years
Last login on 1 April 2017