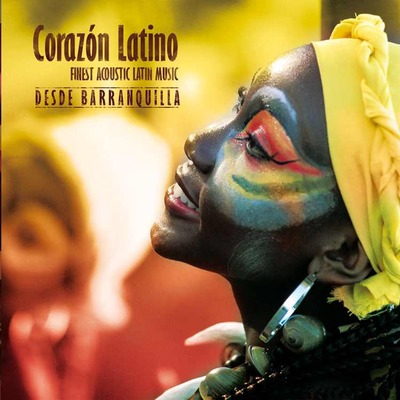 World, Aargau – Corazon Latino is a partnership of musicians from Colombia and Switzerland. DESDE BARRANQUILLA is their second album and it brings listeners the... Read Biography

Corazon Latino is a partnership of musicians from Colombia and Switzerland. DESDE BARRANQUILLA is their second album and it brings listeners the sound of the Colombian coast using a rich mix of traditional instruments, infectious rhythms and original songs composed by the group.

CORAZON LATINO is playing latin music that takes its listeners beyond traditional settings. Even though they use very traditional or even folkloric elements to add flavor to their music, CORAZON LATINO mixes sound colours, rhythms and song structures the way they feel it sounds good.

Gloria Velandia and Andy Bopp have been the heart of CORAZON LATINO since 2002. For many years they worked together starting up as a local fun project turning into an internationally renowned band. Sebastian Enrique joined them on their so far most ambitious recording project DESDE BARRANQUILLA where they worked with some of the best musicians in tropical and latin-pop music. With open minds and open ears they approached their songs, searching for what they consider to be the essence of music: the CORAZON (Heart)

Their music moves between the pop and blues culture and hot carribean rhythms. Their collaboration on DESDE BARRANQUILLA with Einar Escaf was a perfect choice. Einar had already worked with Carlos Vives co-producing the famous mixture of Vallenato and Rockelements. On DESDE BARRANQUILLA they turn out to be a great team naturally combining colombian, carribean and songwriting pop elements.

Kuratorium of Kanton Aargau 2007 for the album DESDE BARRANQUILLA

Radiostations that informed us that they play our music:

"This acoustic album is a breath of fresh, infectious music as good as the aroma of just-brewed Colombian coffee."
Tijana Illich - about.com

"Whew, I feel brand new after listening to this... All the guest vocalists on this album are perfectly placed. With traditional instruments and vocal arrangements, this album sports an Afro Cuban feel that is light but packs serious talent. All parts fit together nicely with nothing outshining the other... Is it soul? Is it Jazz? Is it world? Yes, it’s all of these things. Corazon Latino are all of these things. Their music is a party and we’re all invited!"
Mut Asheru from "Unsigned The Magazine"

Registered since over 13 years
Last login on 20 November 2008