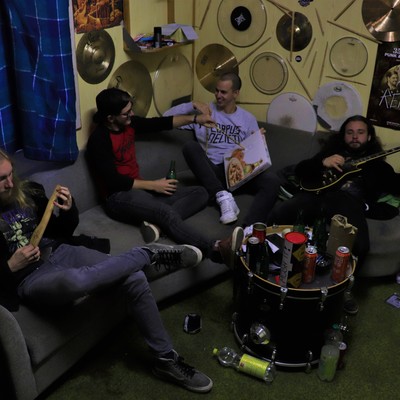 Finest Swiss Old School Thrash Metal – that’s what CORPUS DELICTI stands for. What started in 2013 with some jam sessions of Manuel and Jonas Ehrismann (both guitars), Simon Bommeli (drums) and Sileno Püntener (vocals, bass) developed further over the past years: Own songs were written, first concerts were played and the idea of an own album came up.

With the first line up change in winter 2015 – Tiziano Iannuzzo replaced Jonas Ehrismann – the vision of an own album came true with the promising sounding long player called BREAK EVERYTHING. The album was released through German label Blood Rite Records. More concerts in Switzerland and the surrounding countries followed the release, for example as support of the US-thrashers of POWER TRIP.

When they parted ways with Tiziano Iannuzzo in autumn 2019, Pascal Schneider joined CORPUS DELICTI. With him on the electric guitar CORPUS DELICTI are readier than ever before to rock the stages wherever they go.

Registered since about 1 month
Last login on 10 December 2020