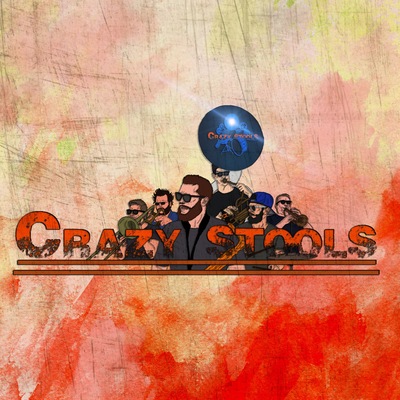 Brass Band, Ticino – The Crazy Stools’ story begins in the far 2010 in Stabio, during a local party, when a group of young musicians decided to play together and heat... Read Biography

The Crazy Stools’ story begins in the far 2010 in Stabio, during a local party, when a group of young musicians decided to play together and heat the environment. Two trumpets, a trombone, a saxophone, an euphonium and a sousaphone, some songs from mysterious archives, and there we were with our first concert!

Then we asked ourselves: “Why don’t we become a real band?”.
Said than done. From that moment, passing through practices, concerts and members’ changes, here we are finally the Crazy Stools: Silvio “Nonno” Lanzi at the drums, Giacomo “Jack” Caccia at the saxophone, Tobia “Tox” Ballan at the trombone, Michele “Shaggy” Ferrari and Andrea “Andy” Rossi-Bertoni at the trumpets and Filippo “Corvo” Doninelli at the sousaphone. A group of amateurs, everyone with his own style and influence, everybody different, but with a common friendship and the urge to play music together. These are the assumptions that have allowed us to be still such in harmony since today, and especially to publish our first CD, “The Ciula’s Mood”, which recalls the history of the Crazy Stools from the origin until today.

Well, a course that have took us to become a real Brass Band, playing music from the Jazz’s classics until more modern songs, rearranged in a new, personal style. During the life of this group we’ve been able to play at important events not only in Ticino, but also in the rest of the Switzerland.