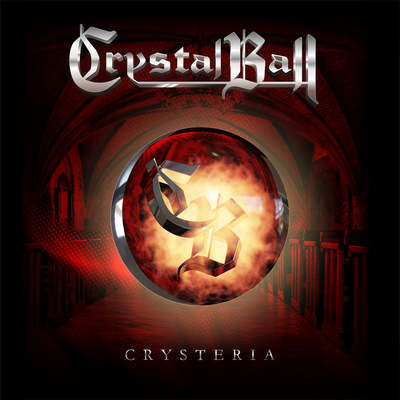 Melodic Metal, Luzern – The latest release CRYSTERIA opens a new chapter in CRYSTAL BALL’s history. In its third decade the band is far from only repeating itself. One may... Read Biography

The latest release CRYSTERIA opens a new chapter in CRYSTAL BALL’s history. In its third decade the band is far from only repeating itself. One may always find new and fresh energetic elements in the band’s music.

During the COVID-19 hiatus the band has spend an intensive amount of time to work on a whole lot of new material. Therefore they have been able to choose from more than 30 songs for CRYSTERIA. The new guitarist Peter Berger has shown himself as a very suitable and motivating Input. He could come up with many songs and ideas for the new album. In fact, the production of CRYSTERIA (by Stefan Kaufmann) has been improved once more and is reflecting the band’s energy, so often seen during their live performances.

The album contains the duett «Call Of The Wild », featuring Ronnie Romero (Rainbow, MSG, etc). The band has been friends with him since a festival in Switzerland in 2018. Another duett can be found on the album: «Crystal Heart» is a band collaboration together with Jaded Heart. The song is written by members of both bands. The two bands has been friends for a long time. In 2022, Jaded Heart will be the special guest for Crystal Ball’s headliner tour.

The band was founded in 1995 as «Cherry Pie». As a cover band they played copious concerts. With a lot of stage experience the band changed its name into CRYSTAL BALL. Thus they could establish themselves as a leading band in Europe. With „In the Beginning“ they started their crusade. The debut was a triumph but was easily topped by its successor „Hard Impact“, which received acclaim by various magazines as «Album Of The Month ». The album was accompanied by a successful tour together with PRETTY MAIDS. Nobody could close their ears anymore to CRYSTAL BALL. The result : a new contract with industry giant Nuclear Blast! With “Virtual Empire” (2002) they toured intensely through Europe, together with DOKKEN, U.D.O., DORO und KROKUS and many others. 2003 they released „HELLvetia“, which was produced by Stefan Kaufmann, a former member of Accept and U.D.O. „HELLvetia“ underlined the band’s success immensely. Due to fortunate tours together with Axxis, Pink Cream 69and Krokus their fan base grew constantly! “Timewalker” (2005) was again produced by Stefan Kaufmann and followed its predecessor firmly. What followed was their first headlining tour together with label mates THUNDERSTONE. In 2007 CRYSTAL BALL signed a new contract with AFM Records. „Secrets“ as their sixth album became an amazing piece of hard rock and was produced by Michael Bormann.

In 2013, after a longer hiatus, the legendary Swiss hard rock band CRYSTAL BALL was back with the new album «Dawnbreaker» – stronger than ever! As a power transfusion, the two remaining founding members Scott Leach and Marcel Sardella found a new astonishing front man in Steven Mageney from Wuppertal, Gemany. The five-pack signed a new contract with Massacre Records. Like this, the band played 40 shows in 6 countries. These successfull tours together with Krokus and The Poodles, confirmed: The Balls are back … for good!

In 2015, CRYSTAL BALL once again stroke heavily back with „LifeRider“. The album was met with critical acclaim and is seen as their best album so far, both by fans and critics. With „LifeRider“ CRYSTAL BALL combined classic hard rock and modern heavy metal. On top, BATTLE BEAST singer Noora Louhimo was hired for a duett on the song « Eye To Eye » and put a perfect match to this overwhelming production. Soon after, Tony „T.C.“ Castell (ex-Krokus) joined the band. What followed were successful shows together with SCORPIONS and THUNDER, as well as a collaboration with members of the Wuppertaler Sinfonie Orchester, which performed together with CRYSTAL BALL.

„Déjà-Voodoo“ was released in 2016. A tour together with SHAKRA through Switzerland and Germany as well as a mini tour through France together with FREEDOM CALL left a lasting impression on rock fans. CRYSTAL BALLplayed many festivals. The Rock the Ring festival (Hinwil, Switzerland) together with DEEP PURPLE, GOTTHARDand KROKUS can definitely be seen as a highlight!

CRYSTAL BALLs tenth studio album «Crystallizer» was released in April 2018 and was supported with a tour together with AXEL RUDI PELL. «Crystallizer» charted as #18 in Switzerland and as #61 in Germany. Following various headlining shows in Switzerland and festivals, such as Rock of Ages or Pyraser Classic Rock, CRYSTAL BALL played their first headlining tour through Germany.

In 2019, CRYSTAL BALL celebrate their 20 anniversary with „2020“ – their first best of – album. It was released in 2019 through MASSACRE RECORDS and achieved #11 in the Swiss album charts. As a double album, it contains 20 songs: 10 songs from their first decade, with new arrangements and new recordings ; 10 melodic metal tracks from the second decade, also with new arrangements and improved through additional recordings.

Registered since over 9 years
Last login on 2 March 2022