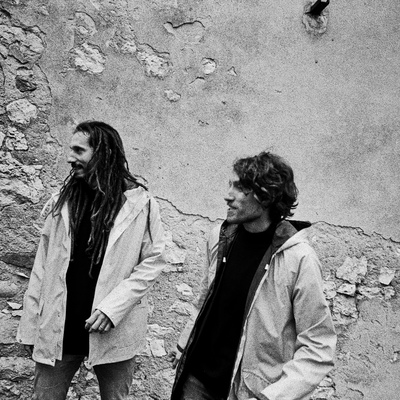 Rock, Geneva – “O ruins! I shall return to you to learn your lessons! I shall place myself once again in the peace of your solitude”. Constantin-François... Read Biography

“O ruins! I shall return to you to learn your lessons! I shall place myself once again in the peace of your solitude”.

Of all the Cyrils born in the city of Calvin at the dawn of the 80s, these two were bound to find each other. Two Cyrils like two dizygotic souls whose contingencies have brought their meeting forward. Cyril Cyril. A liberated hydra, born in this city of diplomats where Borges duplicated his rejuvenated ego in “The Other”.

On the ruins of their worn out bands, they put together an innately cosmopolitan empire. Because these Cyrils have devoured miles, away from their Genovese haven.

A muezzin without borders, Cyril Yeterian came to the disheveled world through Mama Rosin, a three-piece that stirred the ghosts of the rogue bayou, the clammy Mardi Gras of some electric Louisiana. Soon, the world fell in love with their flair. The BBC celebrated them, Jon Spencer produced them, records proliferated. And then in 2017, the honeymoon period passed. Cyril was alone.

Well, not quite: music kept popping up around him. Inside his Bongo Joe record store, on the label of the same name, in the underground DJ sets he stirred up, Yeterian explored like crazy, in a binge of exiled grooves.

Within the same space-time, Cyril Bondi hit the road. Diatribes, La Tène, Insub Meta Orchestra, the most adventurous projects of the Geneva scene all had a bone to pick with this percussionist in search of unheard beats. He, as well, traveled, experienced the ascent, the euphoria of the peaks and then the fall. Plaistow, his mediumistic, hypnotic jazz band, heckled the saturated world of piano-bass-drums trios and won hearts through Europe and the East. Until the breaking point.

So Bondi started looking for premises to drop his equipment. He found better: an accomplice for musical prospecting, another Cyril in tune with his rebellious instinct.

Enough with leaning upon solid piers like a Colossus of Rhodes. This adventure required new baggage, a new language. Cyril and Cyril were in the same boat, and both took the plunge.

A guitarist and an accordionist, Cyril Y. took on the banjo, adding effect pedals to it to turn it into a puny bouzouki, an epic bağlama or a krar. Cyril B. cobbled some cannibal drum kit together, with massive jingle bells and tropical nut shells embedded in his marching bass drum.

You should have seen these two, on a populous festival night, bringing a narrow club to fever pitch by summoning utopian Neguses. Playing new Berbers, provoking unlikely seismic soukous in a trance that has as much to do with the hippie giddiness as with Fraggle Rock.

Indeed, for Cyril Cyril, music is a way of the world, a joyful decentration offering new keys to comprehend chaos. The point here has nothing to do with some globalized country excursion nor some gluten-free exoticism. Beneath the beach lie the paving stones. Politics always end up showing on the surface of these exhilarating chants, of these skeletal grooves.

Apart from tracing back the family pathway of some belatedly-adopted Lebanese dialect, Cyril Yeterian chants rhapsodies in French, the merciless terms of which say it all about coming insurrections.

Thus, “La ville”, a Doorsian declamation in which the epic eloquence of a Goncourt Prizewinner – Texaco by Patrick Chamoiseau – meets the Invisible Commitee’s poetic prophecies. Thus, “Ultra moderne solitude 2”, that has more to do with Alain Péters than Alain Souchon, with this question “Where are the souls / to take up arms with”.

Nothing yet likely to make Certaines Ruines a wordy lampoon of hoaxers, of neo-post-everything killjoys. Since, let’s face it, “the leviathan is intimidating” (“Sous la mer c’est calme”), Cyril Cyril knows the superior power of suggestion, of temperance, of happy sobriety.

A single word, a single cry can say a lot, as long as it is soulful. The sound of a duo reduced to its simplest expression – rhythm, a riff, a voice – can bear within itself an infinitely luxuriant musical organism – the double helix of DNA. Cyril Cyril, so real, so rich.