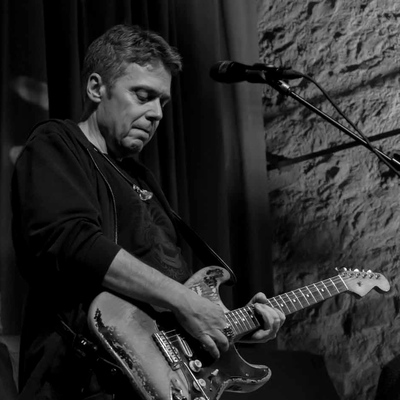 ani Bischoff loves the blues. His passion for musics has never weakened. Its fascinating and thoughtful ways keeps puzzling his mind day by day. In what colourful ways the blues might appear, it always remains Dani’s home. Role models like Steve Ray Vaughan, Albert Collins, Gary Moore, Eric Clapton, Joe Bonamassa and many more have influenced and inspired him since childhood.
After having worked in the studio and playing the guitar in several bands on stage for over three decades, he started his own band “bischoff62” playing live gigs since 2015.

In autumn 2020, Dani’s second album winding road was released. Following his 2018 album “near to new”. On both albums, Dani’s live band is joined by several special guest.
dani used the time during the lock down to produce a new album that will be realesed in april 2021. This time the result is a very personal album, dedicated to all those who brought him to the blues.
musicians on "that's where it comes from":
Imad Barnieh - Drum, Sidi Sidler - Bass, Michael Dolmetsch - Organ & Piano, Jeannot Steck - Fender Rhodes, Walter Baumgartner - Harp and as always Dani vocals & guitars

Registered since over 2 years
Last login on 18 October 2021