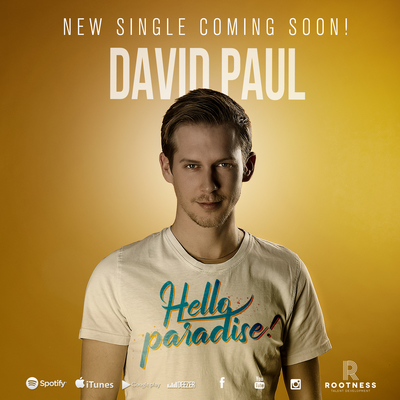 Electro, Rock, Indie,..., Fribourg – Singer, songwriter and composer of Swiss origin, David Paul is an artist who mixes musical styles to translate his emotions into melodies; from his... Read Biography

Singer, songwriter and composer of Swiss origin, David Paul is an artist who mixes musical styles to translate his emotions into melodies; from his childhood, he was immersed in music, thanks in particular to his father, a pianist. As a child, he is said to have an important imagination; later, he would actually discover that it was an extra sensitivity to melodies.
He will keep this constant inventiveness as well as this need for creation as he grows up, since he will then become a beat maker, creating his own production studio at home, after which he will learn to play the guitar.

"If you can, you must. " ; A real need to generate new atmospheres, David develops his art as a therapy that could help those who listen to him, thanks to its positive, luminous and meaningful aspects.
Growing up in the 90's and 2000's, he was first influenced by rock, metal and grunge, especially through bands like Metallica or Nirvana. Through the encounters that punctuate his life, he apprehends new styles and tries to unravel the secrets of what attracts the public in each of them. Always keeping a philosophical look on his understanding of music, he later discovered hip hop and rap, which will create a real resonance in him. As a beat maker, he produced numerous rap productions that he shared with artist John Blue, with whom he collaborated on a regular basis. As a musician and performer, and above all a great fan of Jam Sessions, David has performed on stage many times, which has given him great live experiences that he can't wait to relive thanks to his new solo project.

As a composer, David Paul seeks to develop new collaborations, in order to create productions for other artists, always in search of new harmonies.
In 2020, David released his first single, which he composed and performed. Entitled "I got the Fire", this track represents an appetizer of the variety he is capable of creating; combining humorous lightness and at the same time power of meaning in the lyrics, this track is a spark ready to explode! Electro-rock-indie sounds, the instrumental of "I got the Fire" was imagined several years ago. It's only recently that David took over this project to added the final touch, which will make it a complete and surprising track!
Eager for novelties, many songs from his universe are currently on the verge of being released.

In February 2021, David Paul offers us a song with a summery sound, where warmth and festive atmosphere are the order of the day; eager to be positive for this new year, "Hello Paradise" will take you on the road to the sun!