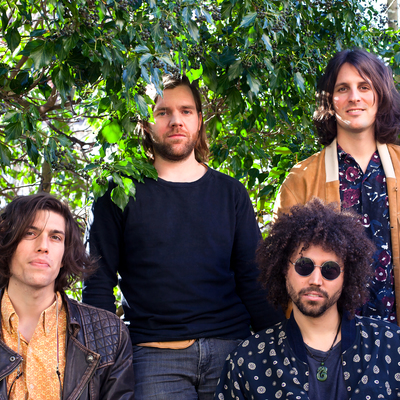 Rock, Zürich – The chorus of their upcoming single 'Dog Bowl' starts with 'Tell you man, we have to get out of here' and is representative for Dawns Mystery from... Read Biography

The chorus of their upcoming single 'Dog Bowl' starts with 'Tell you man, we have to get out of here' and is representative for Dawns Mystery from Zurich. The four lads don't actually care what hype is going on or what the trend of the commercial music scene asks for. Instead they skillfully give priority to their role models from the 70s and 90s.

Their debut album 'Before Life At The Sea Ground' is the result. The explosive combination of their own psychedelic space-rock universe and producer Philippe Laffer's pop influences lead us through a jorney back in time: 'To return in peace, beyond the dust of time', the lyrical poetry sung by Flo Hauri in 'Africa'. The modern mix of experimental arrangements is part of the album's characteristics we only know from bands such as Tame Impala. The sound of Dawns Mystery screams for big stages. Aesthetic, dreamy songs like '1670' (Don't you see, we can't feel the spinning around. We can't help it to see the past, to see the future, to watch the stars burn) round off the work, time and effort they put in the record. Fantastic melodies, partly sung polyphonic, keep spinning in one's head for days.

While listening to 'Before Life At The Sea Ground', one only wishes sunlight, a beach and maybe a space shuttle taking us along with their positive vibes to the galaxies of foreign stars far away.

Registered since about 6 years
Last login on 27 April 2019