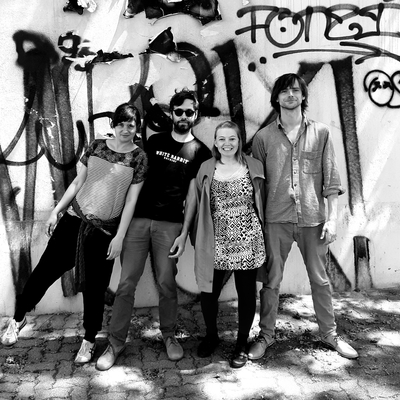 Deasil and Withershins started as a project with Sonja Roth and Seán Michael Byrne living, travelling and playing music for months all over Europe. 2021 they settled down in Basel and drummer Laura Tobler and bassist Finn Mück joined the band. They’ve played many small gigs in pretty venues and fashionable gardens in Switzerland, Ireland, Scotland, Greece and Italy. An Irish singer-songwriter attitude melded with Swiss DIY Punk, and raw, rough guitars carry the sound of the band. Deasil and Withershins are drawing philosophical pictures and melancholic sideways into our new worlds.

The listener bumps into unexpected answers:

How can we live with history? (Aftermath)
How does it feel to be a jellyfish? (Jellyfish)
What gets us out of depression? (Lava Bird)

Deasil and Withershins shakes your dreams and memories. The 15th of april 2022 their EP Shores unknown will be released. The single Aftermath (release 28th january 2022) will make you want more.

Registered since about 3 years
Last login on 11 April 2022