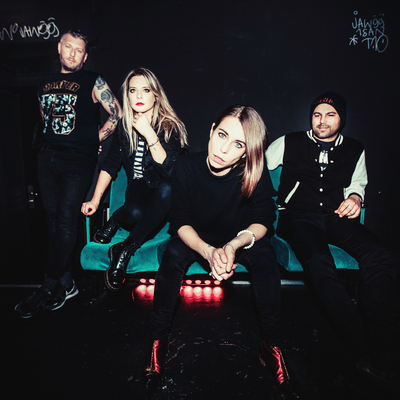 Once you have fallen in love with Punk, you won't be able to get away so easily...

Let’s go back to 2004, the Year Zero of DELILAHS, when Isabella Darling (formerly Eder) and Muriel Rhyner first met. They’re common denominator? A passion for not just any kind of music, but specifically Punkrock music. When 2008 Daniel Fischer and Philipp Rhyner completed the bands formation, they brought more love for loud guitars and speedy drums, mostly from the 1977 England era, to the table.

To this day the quartet has released four studio albums and one EP and has played around 650 live shows. With each release DELILAHS’ sound has developed stylistically, settling in somewhere between Pop, Rock, New Wave and Indie Rock. From large to small stages all over Switzerland and Europe alike, nested somewhere between mainstream and subculture - there is no obvious label to slap on DELILAHS.

While drifting from their roots was a deliberate development, the desire for Punkrock always lingered. And so in 2013 DELILAHS formed the exclusively live side-project DELILAHS’77, where they celebrated their favorite Punkrock songs, like classics from The Clash, The Skids, X-Ray Spex, The Undertones, Ramones and many many more. Whenever the itch for excessive volume and Czech beer arises DELILAHS’77 pack their gear and hit the road from here to Prag to Berlin and back, scratching that itch in the oldest and most iconic Clubs of the underground.

Now for the first time DELILAHS’77 take the action off the stage and directly to your earbuds or home stereo system. An EP with 4 Cover-Songs for you lockdown pleasure!
But wait a second. Who’s the Lead-Single WHEELS by? Simple: DELILAHS’77 are „covering“ DELILAHS, an original new and unreleased Track, already covered (by themselves) as a super mashup and unifying factor between the two! Got it? Good.

WHEELS is a slamming Powerpop hymn about the last moment before you hit the cold and hard floor of reality, just before the world slips from your grasp and all hope is lost. There’s strength in that moment, when you’re ruthlessly undaunted and ready to try what ever it takes, maybe just one last time.
WHEELS is also featured on an exclusive 12“ Vinyl Sampler, next to numerous Swiss Garage and Punkrock bands, released by Lux Noise in mid April 2021.

NO FUTURE was yesterday. OUR FUTURE, the future we can create for ourselves, that’s the one DELILAHS are about. Our present times bitterly needs that kind of optimistic motto, and here’s the soundtrack to it.