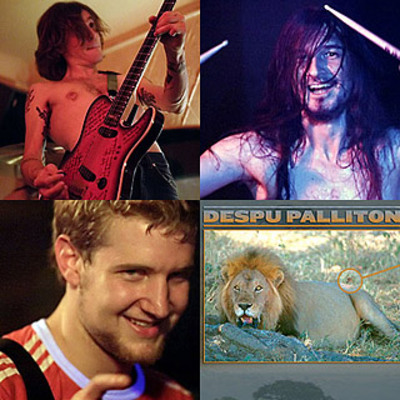 Rock, Zürich – These days, there's too much talking about the hundreds and thousands of styles played by the huge number of existing bands around the... Read Biography

These days, there's too much talking about the hundreds and thousands of styles played by the huge number of existing bands around the globe.

Despu Palliton is not here to explain. The Band is here to play.

This group was formed to play and express all the feelings a human being can have. Words and music are written to deal with, and to get rid of certain issues - issues that trouble the writer.

The Band was formed out of deepest passion for music.

Despu Palliton built its musical foundation on rock music of the late sixties and hardrock of the mid-seventies, generally speaking. A million songs from Mars to Venus and back again may have influenced the band. There really is no rule.

It's all about doing our own thing, with no interest in the sellout that is taking place in the so called commercial music world.

What counts most is the best possible result of a song.

If this is achieved, the band is happy. Playing those songs live on stage, will hopefully make the listeners happy too.

The styles and ways of the future are all open.

The music of Despu Palliton is allowed to fail in everybody else's opinion, because it's made from people who do fail, once in awhile. It's all about living life the best possible way, and about honesty.