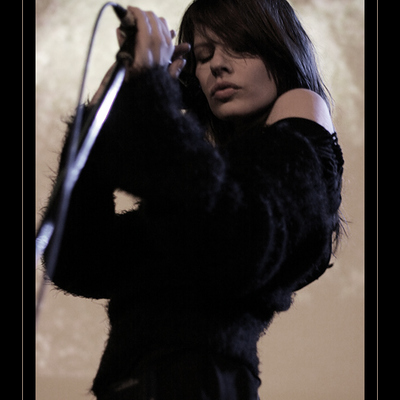 Two years after the debut of MONSTERPROOF, DIVISION KENT is back with GRAVITY.

The new album derives its name from a track created by a series of coincidences and accidents: a beat flying into a frenzy; a voice that dives abruptly one night; two song sketches coming together.

„GRAVITY is dark with colour“, is how Andrea B. describes the 11 songs. A fictional trip through a reality-scape melding cinematic moods and the stardust of pop culture. Moments before they blur from the urge to be everywhere and nowhere – sometimes “upbeat”, sometimes “zen”, but always completely lucid.

Where the first album largely emerged from the musical convergence on the corner of Division Avenue/Kent Avenue in industrialised Brooklyn – DIVISION KENT sought the collaboration of soul mates this time round.

Peter Scherer, a musician, composer and producer whose work has heavily influenced the New York music scene for the past 25 years, produced two of the songs. During the course of his career, he regularly surpassed genre borders and cooperated with experimental artists such as Laurie Anderson, Ryuichi Sakamoto, Amedeo Pace/Blonde Redhead, David Byrne/Talking Heads.

He introduced DIVISION KENT to Peter Schmidt (Beatsteaks, Klee), whose Berlin based Ballsaal-Studio was where a major portion of the album was mixed.

Peter Schmidt bridged a relationship between Division Kent and Gareth Jones (Depeche Mode, Interpol, Indochine, Nick Cave) – a pioneer since the beginning of the 80s well known for his amalgamation of electronic music with guitar sounds, as well as balancing the atmosphere, noise and beauty of a melody.