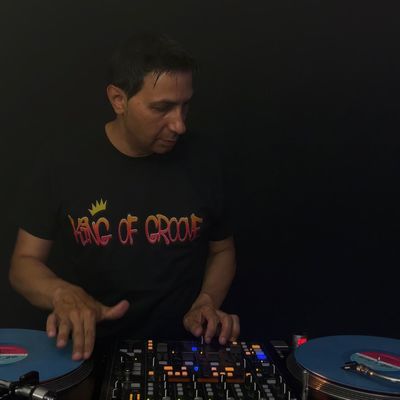 DJ N-JOY is a true living legend one of the pioneers top creative DJ, Artist, Producer, Remixer, Songwriter & Composer around the world. Actor and Film Director
DJ N-JOY has declared: I was worldwide one of the first with this DJ name N-JOY, The idea’s Name DJ N-JOY came in 1983 watching a vinyl record from Grandmaster Flash Released in 1979 inspired from a famous record label company in USA called ENJOY Records created by the great Bobby Robinson.
Originaly from Sicily (Italy) born aka Leonardo Stella in Switzerland 31.01.1971
He grows up around Zuerich in Switzerland.
He started his DJ carrier in the early 80‘s, as a little kid and starts to play in the most legendary clubs in Switzerland: Peter Pan and The Club and later in big partys and clubs around Switzerland.
In the 90's he became one of the first DJ to present live, his famous special MASTER MIX RADIO SHOW on Swiss national radio. DJ N-JOY’s Master Mix Tape was famous because of his own creativity mix style.
One of the most talent around the mix, his special scratch sampled effects and mashups, put in the mix with four turntables snipped and cutted with a real to real tape machine.
As the Resident DJ at such popular Swiss clubs, discos and partys all over Switzerland.
A lot of stars like INCOGNITO, IMAGINATION, JOCELYNE BROWN, INNOCENT, TONY SCOTT , D-E-S-K-E-E , ADEVA and other great artists came as guests to play with him in the best time of the nightlife in Switzerland.
The leader and half of 2 DJ's AT WORK joined by European House Music DJ N-JOY has recorded as TWO OLD SKOOL BOYZ, TOO STRONG NO CHANCE; DJ N-JOY Project, 2 DJ's AT WORK , Sweet Sound Machine, Delicious Of Funk, One To One, Sounds Of Class and many more....
He remixed songs for world famous music stars.
He produced in 1995 his first track called Party with me.
In 1997 DJ N-JOY did a track on Suntune Records in Italy called Groove Me thanks to Angelo Tardio the A&R of the record company that became a Club House smasher in a lot of radio stations.
In 1999 he produced & remixed the Black & White Brothers World Wide Party.
DJ N-JOY went the first time in a disco in 1978 with his older sisters.
There he got the inspiration of the disco funk boogie Soul music. In 1981 he received a part as an actor, together with his two sisters in the movie "Zürich Abseits" of the well-known swiss director, ANDREAS HONEGGER.
At the beginning of the 90's he began as producer of music.
He produced from underground to very successful tracks for DJ's.
In 2000 he produced and remixed his first Remix Album of the famous italian group SQUALLOR. Together with one of the world greatest producer, songwriter & composer The Italian Genius of Music and Artisan Giancarlo Bigazzi, DJ N-JOY says Giancarlo helped him a lot to let his dream come true to do this project of The Squallor, Bigazzi also discovered a ton of great italian & international world famous stars and sales worldwide over 200 Mio Records.
DJ N-JOY worked also with another great person of the music industry record company MBO Mario Ragni.
DJ N-JOY continues to work in top studios with a long time friend Alessandro Cutolo from Elettroformati Milano (Italy)
DJ N-JOY is also the author of the world-famous "Pump it Up" performed by The Black & White Brothers in 1996, realized by DANZEL in 2004 became a big hit. Later performed by the world famous BLACK EYED PEAS in 2009 another worldwide big hit.
And in 2019 performed by the young Australian Dj & Producer ENDOR this became also a big club hit
In 1996 he created his own Record Label DC RECORDS.
In 1999 he started together with FRANKIE FRANK the 2 DJ's AT WORK Project for the Italian producer JOE T VANNELLI.
Actually DJ N-JOY continues to write and compose music exclusively on his own Record Label LSGT MUSIC created in 2015 with his girlfriend.
In 2007 DJ N-JOY worked also with the famous Original SNAP Lead Singer PENNY FORD (The Power).
Snap was nominated in 2007 as the most famous pop group of the 90's.
DJ N-JOY feat. Penny Ford song called "When we rise"
DJ N-JOY also produced with Penny Ford a few songs for DJ N-JOY The Album released in 2016
In 2009 togheter with the legendary Master Mixer John Morales M&M MIX DJ N-JOY they mixed the Salsoul disco group Classics SKYY – Here's to you for Randy Muller (Brass Construction, Skyy) on Plaza Records in NYC.
In 2015 he directed DJ N-JOY‘s Clubbing and music culture, the movie. A documentary film about the legendary dj’s, artists and clubs.
In 2016 released his second Album DJ N-JOY The Album
He also worked with the Great Italo Disco Legend Stefano Pulga for DJ N-JOY The Album the song called Everybody Summer.
In 2020 released a new single with another talented artist LILLA, originary from Portland (Oregon) USA, the song called, It’s Time To Dance.
Follow up in 2020 with another great artist called Phoenyx Novelle the title is You And Me Tonight. DJ N-JOY recorded also with her other few songs for the album I AM.
In June 2021 the third long awaited album since 5 years called “I AM DJ N-JOY”.
April 29.2022 started a new music project with the release of a brand new single called Everybody Get Up featuring vocals by Shanti E11is. May 6.2022 released the remix of Everybody Summer 2022 featuring Italo Disco Legend Stefano Pulga on vocals.
Follow up another big project with Hip Hop R&B Soulful Legend of the 80’90’ singer Tashan7 You Lift Me Up release date May 27.2022
New Album is coming June 17.2022 (KING OF GROOVE)

Registered since about 1 month
Last login on 24 June 2022