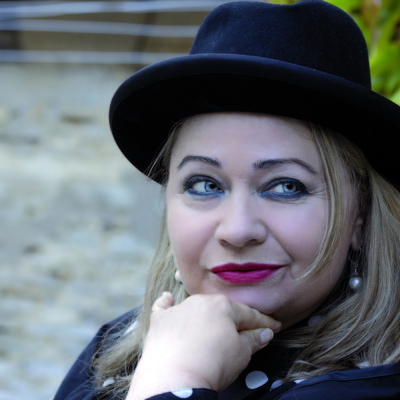 biografie
unique is just one of the many praises that one can use to describe, multilingual, singer-songwriter, dodo hug. dodo’s career as a musician and comedian has spanned over almost 40 years; entertaining and delighting audiences well beyond the borders of her home, switzerland. dodo first appeared in the spotlight with christoph marthaler & pepe solbach’s music theater project ‘TaroT’. with the aim of expanding her own artistic talents, dodo created the music and comedy ensemble
mad dodo, a project that kept her busy for many years; until 1994, when she partnered with an outstanding talented musician, sardinian efisio contini.
an artistic partnership that has since blossomed into their off-stage lives.

dodo worked with a melting pot of international musicians, who hail from countries such as italy, france, belgium, england, usa, brasil, columbia, bulgaria, romania und the czech republic. dodo hug’s artistic talents do not stop at music! her acting talents have brightened several theatre plays, not to mention television and film. multitalented dodo, has written and composed numerous songs, and co-produced many of her albums. she has been awarded the “Salzburger Stier” in 1985 and the “Deutsche Kleinkunstpreis” in 1992. In 2006, her book «madâme dodo" - die chamäleondame (german only) was published by and is available at www.viamala-verlag.ch . more about dodo hug www.dodohug.ch/biografie.html

Registered since over 10 years
Last login on 16 October 2014